Grain markets flipped the calendar this week on not only a new month, but also a new quarter, and there was plenty to digest. It really started in Tuesday’s wild U.S. Presidential debate, then was followed by Wednesday’s quarterly stocks and annual small grains production report from the USDA, and then finally, the news early Friday that President Trump tested positive for COVID-19. U.S. grain inventories as of September 1st, 2020 were certainly bullish, but we saw lots of selling on Friday on concerns of the President’s health.

This specific quarterly stocks report from the USDA gives us a good understanding of what grain and oilseeds demand was like for the final months of the previous crop year, as well as giving the market the baseline for how much grain will be carried into the next crop year. In this year’s September 1st grain stocks report though, the USDA made some historic changes that helped grain markets rally significantly on Wednesday. 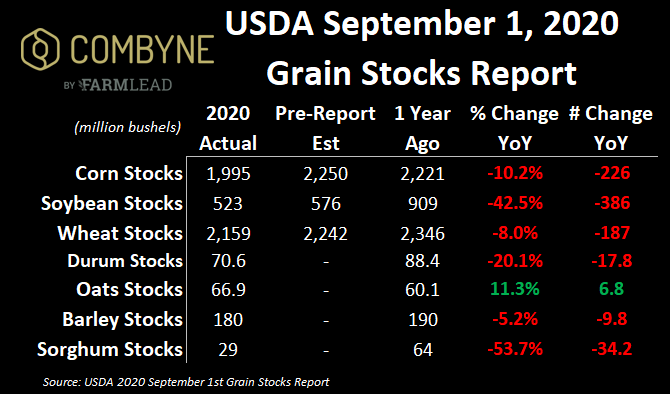 As you can tell in the table, since there was such a huge bullish variance from what the USDA printed and what traders were expecting, corn futures on Wednesday closed at a seven-month high on Wednesday. The push of corn stocks lower was largely attributed to the smallest number for the Sept. 1 grain stocks report in 4 years, as well as a nearly 205M bushel adjustment lower for the June 1 grain stocks report! About 75% of that adjustment to the June 1 grain stocks number was attributed to less on-farm storage.

The other factor of volumes disappearing in the last quarter of the 2019/20 crop year suggests corn demand was the 2nd-largest ever and only 4% behind the record set in the 2018/19 crop year. But how is that possible, considering that from June to August 2020, ethanol production was down 17% and corn exports were about 31% lower, compared to that record-setting year in 2018/19. The answer lies in the feed and residual use line items, which was a 14-year high, and about 8% higher than 2018/19. There are some doubts to this increase, however, given the animal inventory data out there.

Soybean stocks saw an even larger reduction, down 42% year-over-year to 576M bushels. Soybean prices were also supported by yet even more sales to China, and the reality that total exports are tracking nearly 60% higher year-over-year with almost 4.7 MMT sailed through Week 4. Moreover, soybean export sales to date have been the most ever and with that knowledge, it’s unsurprising that managed money is estimated to now hold, as of this past week, a new all-time record net long position in soybeans. Helping them was updated data from Brazil that its largest soybean-producing state, Mato Grosso, could use some rain, and quick as their Plant 2020 campaign is supposed to be hitting full stride right about now 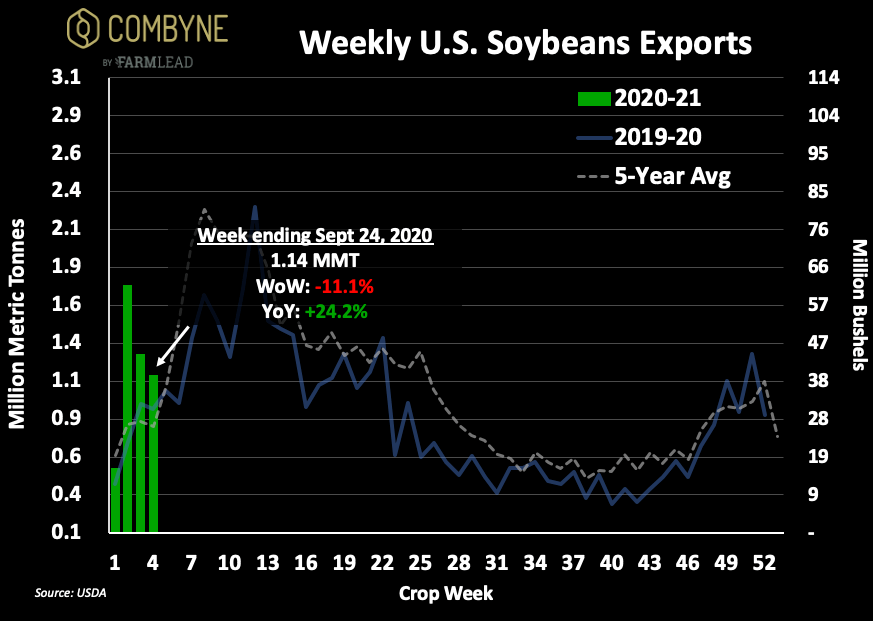 On that note, this might be the start of another La Nina event, which tends to weigh on production numbers in South America. More specifically, La Nina events have also produced some of the worst corn and soybean harvests in Argentina ever, including in 2018 which saw soybean product fall more than one-third from its seasonal average. As of today, most weather organizations now agree that there is a high likelihood that we’ll see a La Nina event this winter. Australia’s Bureau of Meteorology was the latest group to add their name to the list this past week, meaning the Land Down Undaa is going to be wet the next few months, especially in eastern and northern areas which have been extremely dry the last few years.

On the flipside, in North America, a La Nina over the winter months tends to bring wetter-than-normal winters for BC, Ontario, & Quebec (AKA more snow to shovel) and colder-than-average temperatures in the Canadian Prairies. [4] In the U.S. Midwest, a La Nina even tends to bring a dry, warmer-than-average temperature, suggesting that American winter wheat crops could have a see-saw next few months of dormancy.[5] Similar to Argentina’s 2018 soybean harvests, U.S. winter wheat harvests in 2018 after the 2017 winter La Nina were also sub-par.

Coming back to the markets, soybean prices were kept in check by more good harvest weather in the forecast, as well as some lower expectations from more buying from China due to the reality that the annual Mid-Autumn Festival is ongoing and will last until October 8th. Some vegetable oil headlines weighed on values as well including some heavy selling in Malaysian palm oil futures, and news that that Argentina will cut its export taxes on exports of soybean and soy byproducts (i.e. soy oil or soymeal) by 3 points to 30%, as the government tries to incentivize more exports and thus, create more revenue for themselves.

The bearish news in the vegetable oil complex pressured canola prices more though, pushing the Canadian oilseed to a loss for the week (albeit, barely). That said, canola demand, both domestically and abroad, continues to be strong, notably the 1.65 MMT of exports already sailed through Week 8 (which is up 44% year-over-year). 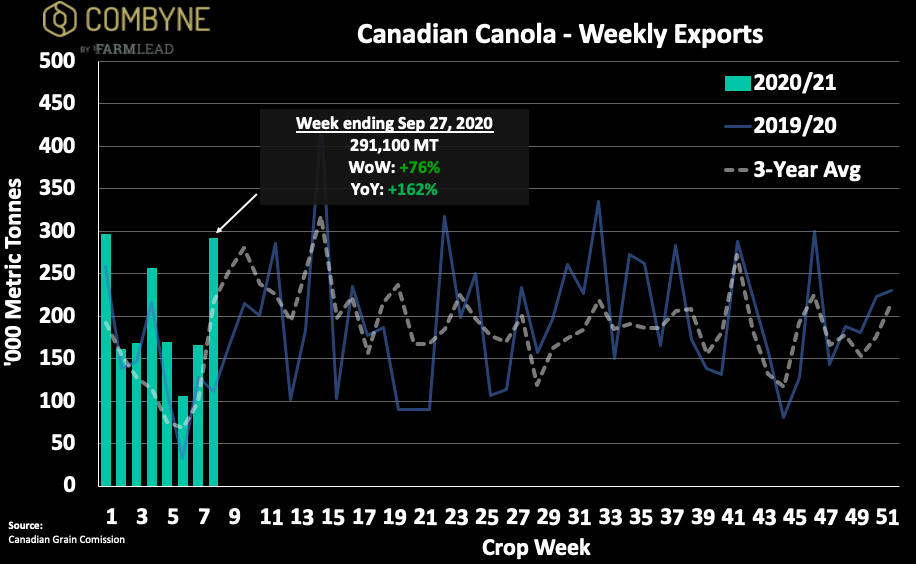 We continued to see healthy selling this week on the Combyne trading network of both spot and deferred delivery and with this selling in mind, I have to consider at what point do these buyers not need as much product? In that vein, I’m taking a serious look at some of the early 2021 deferred delivery pricing options in the $12s across the Canadian Prairies, especially relative to where we’ve been over the last quarter (most futures contracts are about 10% since the start of July.

The USDA also published its annual small grains production report, which included all wheat types, as well as data on the barley, oats, and rye harvest. As you can tell from the table below, the production of small cereals was generally larger compared to last year, including oats, rye, durum, and HRS wheat. At face value, it’s likely a little bearish for these crops, given the Canadian volumes of these crops that head across the border into American facilities. 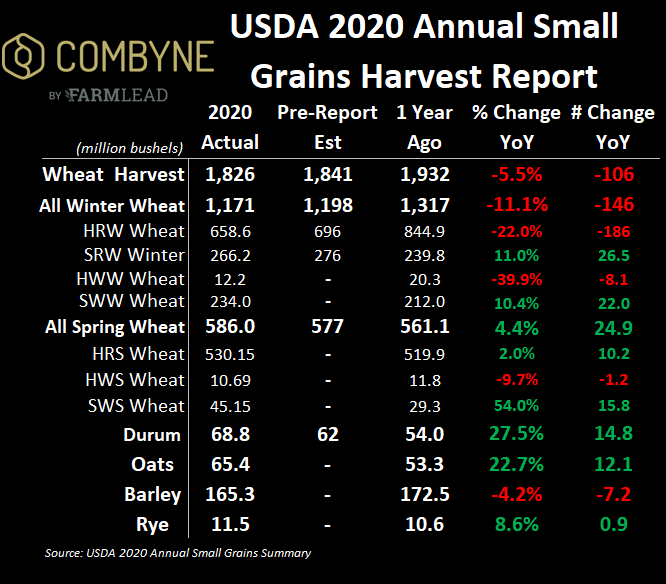 Overall, the attention of grain markets in October will likely be distracted by the fiasco that’s become the U.S. Presidential election, as well as impact of the November vote on trade relations with China. Ultimately, the positive harvest weather, combined with the really strong harvest grain prices is something we should be thankful for. But my recommendations remain clear: selling incrementally into strength, and at profitable levels is smart risk management. And just because you’re okay, cashflow-wise, don’t let that blind your decision-making, hence my hint above for making some sales for delivery in early 2021.