Grain markets finished the last week of October in the red, but the pull-back this past week was not enough to keep the complex from having a positive monthly performance for front-month futures contracts. To finish off the month of October, a lot of trading activity circled around a few key factors: La Nina/dryness issues, the U.S. Presidential election on Tuesday, November 3rd , and money managers adjusting their positions for month’s end, as well as the aforementioned vote on who gets to sit in the Oval Office for the next 4 years. However, for equity markets, new COVID-19 lockdowns in Europe led to heavy selling, which was part of the reason that the Dow Jones had its worst monthly performance since March when all the COVID-19 lockdowns began!

Wheat futures have pulled back the last few sessions as rain and snow fell on parched land across the U.S. Southern Plains. The rain overcame the relatively bullish dynamic that was the USDA’s winter wheat good-to-excellent rating of 41% G/E, which was well below the trade’s expectation (52%) and the worst start for the crop since 2013. Cue the reminder, however, that the winter wheat crop isn’t made in the fall!

Leaning in, most of this past week’s sell-off in grain markets occurred early in the week, with losses being recouped a little bit on the basis of continued strong demand. For example, in corn markets, total exports sales of U.S. corn in the 2020/21 crop year at sitting at 30.6 MMT, or nearly 170% more than the same time
a year ago! Nonetheless, the December 2020 corn contract is now sitting back below $4 USD/bushel on the futures board in Chicago. I, and many others, think that there is more than just these sales baked into the price, but we all know this pace of demand can’t last forever! After all, there’s many other players who can also export grain such as Brazil. However, Brazilian agricultural analytics firm Cepea notes that average cash corn prices in the country have gained nearly 30% in the last month alone! At nearly $7 USD/bushel, this would be competitive with U.S. corn landing at Brazil ports! That said, corn prices in China are also sitting at record levels, an indication of how both supply and demand factors driving the current rally in corn prices.

Another dynamic to consider in this corn market is the smaller harvest out of Europe, as the summer drought has negatively impacted yields from Romania to France. This past week, APK-Inform lowered its estimate of the Ukrainian corn harvest to 33.8 MMT, which follows the Ukrainian Ag Ministry’s own downgrade to 33 MMT and one trade union’s 30 MMT estimate. As a result, in the last few days, domestic corn prices in the Ukraine have reportedly jumped up as much as $25 USD/MT (or about 65¢ USD/bushel if converting metric tonnes to bushels)!

Considering that Ukraine is the 4 th -largest corn exporter in the world, with over 80% of their harvest usually shipped out of country, the continued downgrade of the crop is another positive factor for corn prices to remain elevated (at least compared to where we were just a few months ago on the futures board). This
mismatch of demand and supply issues isn’t following just corn prices around, but canola and soybeans as well. Brazilian producers have gotten a late start to planting their soybean crop due to dry conditions. And while the planting pace has certainly picked up after many areas received a few shots of moisture, the late start

has created some concerns about disease susceptibility and the need for good pod-filling weather in December and January. In the meantime, Brazil is importing soybeans from the U.S. to keep their crushers going, thus creating some opposing forces for U.S. soybean prices: On one hand, the surprise demand from Brazil is welcome but the timely rains there are going to help a crop that will compete with U.S. soybeans. Let me be clear though that there’s not millions of tonnes of
U.S. soybeans headed to Brazil, although Bloomberg is reporting that almost all major agricultural trading firms are “looking into how they can make the transaction work.”

Pulses are also feeling top-heavy to me and the downside risk is very real for a few reasons. A few weeks ago, we were trading in the low $8s CAD/bushel, but this week, we saw plenty of $9 handles trigger in many areas of western Saskatchewan and Alberta on the Combyne Ag Trading Network! The recent run up
in prices is pretty significant and the pull-back could be even more aggressive, considering that ending stocks could grow if pea exports don’t meet the near-record expectation of 3.8 MMT that Agriculture Canada is currently forecasting (record of 3.95 MMT was set in 2016/17). 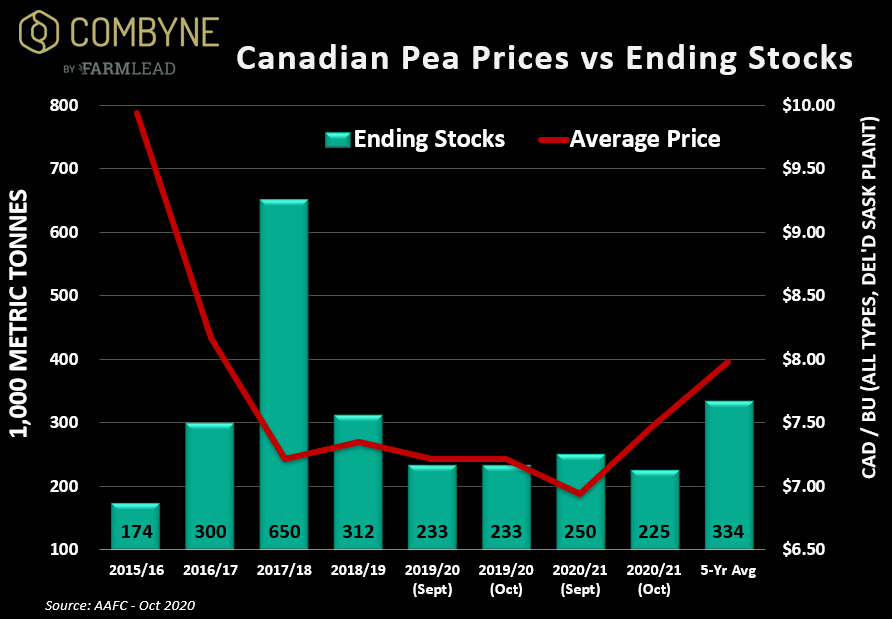 Through Week 12, Canadian pea exports from licensed exporters are tracking one-third higher than a year ago with 1.14 MMT sailed thus far. Similarly, with the Turkish lentil harvest about half of what it was supposed to be and India’s import tariff remaining at 11% until the end of 2020, lentil exports have been
cruising, 88% year-over-year. However, there is a major risk that this pace is going to slow down and that this estimate from AAFC won’t be achieved and it’s because of one critical piece of the supply chain: shipping containers.

Given all the supply chain disruptions that COVID-19 has caused, seacans/shipping containers are in high demand right now and are being sent back to Asia empty, instead of being filled with the likes of peas or lentils. Further, major ocean logistics company, Hapag-Lloyd, announced last week that it is temporarily
suspending their outbound/overseas container shipments from North American ports (which means they’re purposefully sending containers back to Asia completely empty).

Bottom line, this is a huge blow for both American and Canadian agricultural exporters of everything from soybeans to peas and lentils. Quite literally, about 30% of Canadian pulse crop exports are shipped out in containers, so with limited supplies of seacans, I have major concerns that the current pace of aggressive
buying will start to slow down. Of course, exporters could pay more for these containers to stay in North American ports so that they can be loaded with peas, lentils, or whatever, but that will intuitively bite into the price.

However, I don’t think this can be solved overnight as you then have re-route all these containers that have been scheduled to be elsewhere. Thus, it’ll likely take months to get resolved and that’s not great news at all when pulse markets are seeing some of the best demand in years! Arguably, exporters would be willing
to pay more to make sure they have containers to ship their products in, but they cannot control if a shipping company will keep these agricultural export vehicles in port or not starting tomorrow. Perhaps everyone in Ottawa can finally agree on something and fix this?

Fanning The Flames — This Week in the Markets

Corn School: How Ontario stacks up in the corn production world