Grain markets had another positive week of momentum on dry weather concerns and continued strong export numbers, albeit traders took profits on Friday, limiting the weekly gains. Corn closed above $4 USD/bushel on the Chicago futures board for the first time since August 2019 as exports (both sales and shipments) to China continue to grow. While the Chinese government says everything it’s fine and domestic supply is adequate, their own Dalian Commodity Exchange saw corn futures hit new record highs this week!

Winter wheat futures were the clear winner for the week though as dry conditions throughout the Black Sea, Argentina, and even parts of the U.S. pushed the bulls to increase their long positions. Since rains in the forecast are limited, this seems to be a short-term buying spree that could likely end as soon as we see moisture events. That said, Chicago wheat prices pushed higher to levels not seen in almost 6 years (December 2014) on the dryness headlines and continued strong export activity.

Specific to Argentina, the Rosario Grains Exchange said this week in its monthly update that the country’s wheat harvest will total 17 MMT, 1 MMT less than their previous forecast. The agency blamed dry conditions and frost for their reduction, something that the Buenos Aires Grain Exchange also indicated in their weekly report, in which they also downgraded their forecast of the Argentine wheat harvest to 17.5 MMT. For perspective, the Buenos Aires Grain Exchange’s first estimate of this year’s wheat crop was for 21 MMT, which would’ve been a new record.

The bottom line is that these two local estimates are still well below the USDA’s own October WASDE report estimate of 19 MMT. Further, October’s print was 500,000 MT below their September WASDE report estimate. With La Nina-type conditions developing, more dryness is expected in the coming months, especially in central and northern wheat-growing areas in Argentina. Comparably, prospects remain elevated in southern areas of the country and that could make up for some of the abandoned fields to the north. Ultimately, in my opinion, it looks like the Argentine wheat harvest is getting smaller, not bigger, as we get closer to combines rolling down there.

Accordingly, international buyers seem to more than aware of the smaller wheat harvest in Argentina, as well as the Ukraine and Europe. With 3.9 MMT shipped out of Canadian ports through Week 10, Canadian non-durum wheat exports are tracking about 28% higher year-over-year. Worth noting, however, is that last week’s Canadian non-durum wheat export volumes were a marketing-year low of less than 200,000 MT. 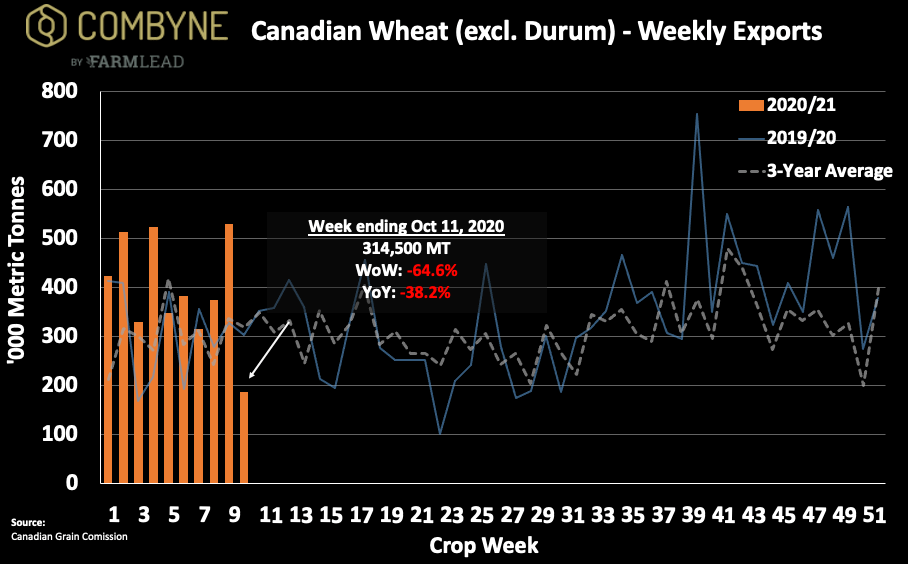 While certainly not a trend, I continue to reiterate the reality that this strong pace of what I’ll call “COVID-19 over-buying”, this early in the marketing year, won’t last forever, especially when you consider Australia’s wheat harvest is coming to market soon! Thus, as international demand for Canadian wheat exports (or from the U.S. for that matter) slows down, there’s obvious implications for prices. Of course, if it doesn’t rain, then yes, there’s a chance that speculators will continue to drive wheat prices higher like we saw in July 2018, but the downside risk at these levels, for me, is tough to ignore.

If you’re looking to manage some of this downside risk and lock in a sale, be it for immediate movement or at a later date, I’d obviously encourage you to post it on the Combyne agricultural trading network. In fact, we just added a new feature that allows to post your Listing for only specific types of other Combyne users to see. Try it out and post a new Listing on Combyne today! 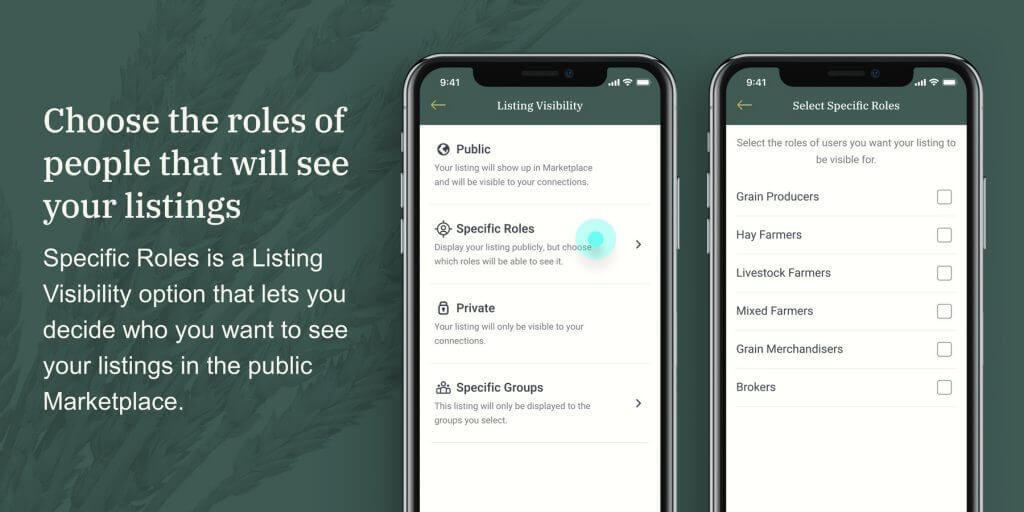 While wheat exports might slow down, my opinion of international demand for oilseeds is quite different. More specifically, there are some serious La Nina-related production implications for South American soybean crops, and because of that, the upside is likely greater for soybean prices than canola prices. Nonetheless, canola prices seem to have more upside over the long-term and look no further than the current pace of demand!

Through Week 10 of the 2020/21 crop year, Canadian canola exports are tracking nearly 50% higher than a year ago with almost 2.3 MMT shipped, a new record for this time of year. This includes last week’s one-week shipment of more than 400,000 MT, the largest one-week shipment since Week 14 of 2019/20! While I think that canola exports have a strong chance to maintain a healthy pace, I’m not sure we’ll hit a new record to top the 11 MMT shipped out in 2016/17. Accordingly, taking a look at the January 2021 canola prices chart, I’m cognizant of the highs made almost a month ago and that we’re not far away from testing it again (which is potential sales indicator for me). 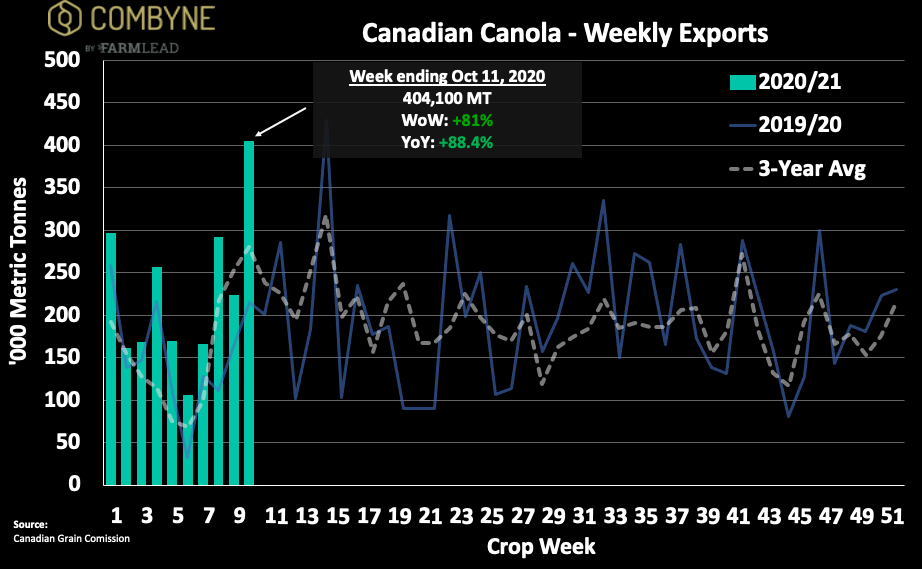 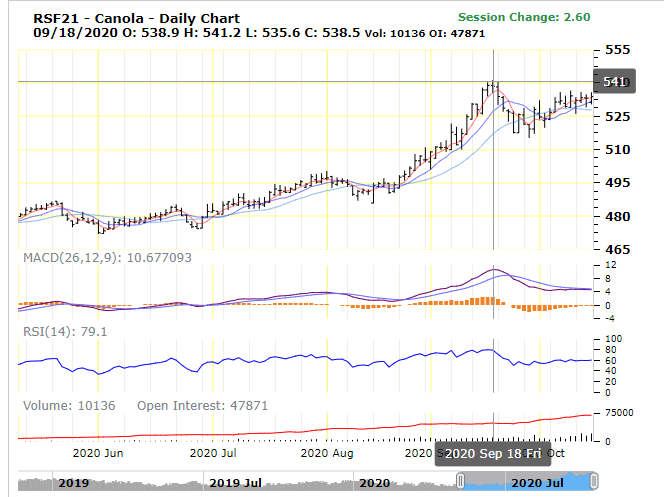 Much like canola exports, American soybean exports are performing very strong, and are also starting out their crop year at a record volume of shipments: China is the obvious main buyer, but supporting soybean prices is a proposal from Brazil that would temporarily eliminate import tariffs on corn and soybeans from countries not located within the Mercosur trade block. That this translates to is that the U.S. might be shipping soybeans to Brazil, especially since the arbitrage is worth it with domestic soybean prices trading a record highs! 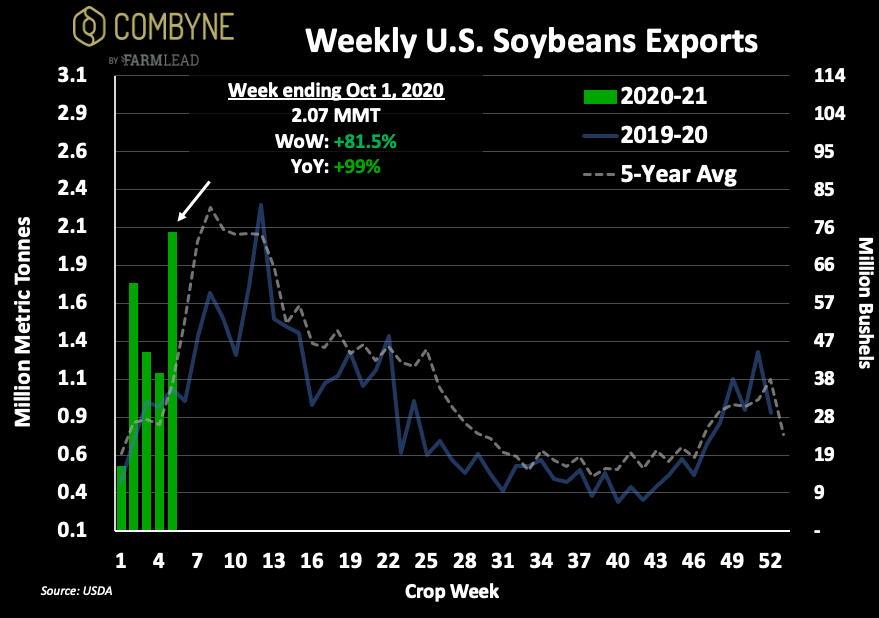 Also worth noting is that the NOPA crush report for September showed that 161.5M bushels were used (or nearly 4.4 MMT if converting bushels into metric tonnes), which was slightly above the trade’s expectation, and nearly 65% higher than September 2019’s volumes. Ultimately, while soybean and canola exports continue their record pace, the domestic crush volumes are accounting for a large portion of demand, and are obviously supportive of current levels!