Grain markets headed into the October long weekend on a high note after the USDA published a fairly bullish October WASDE report on Friday, October 9th, 2020. In it, the UDSA dramatically lowered soybean ending stocks, which helped propel the oilseed complex higher, including canola and soybean futures getting back up to levels not seen since spring of 2018. Corn futures jumped up to a new one-year high, and while wheat futures did pull back on Friday, they did hit a five-year high earlier in then year.

Going into the October WASDE, most market participants were looking at what the USDA was going to adjust average corn and soybeans yields to, as well as if they’d recognize the strong pace of export sales so far. On the supply side of things, the USDA actually raised average corn yields by 0.7 bpa to 178.4, while soybean yields were raised by 0.3 to 51.9; both updated yield numbers are new records. The kicker, however, was that the USDA lowered harvested acres for corn by about 800,000, while harvest soybean acres were felled by 633,000 acres. As a result, U.S. corn and soybean production numbers both came in below the market’s expectations, and thus, was bullish for investors. 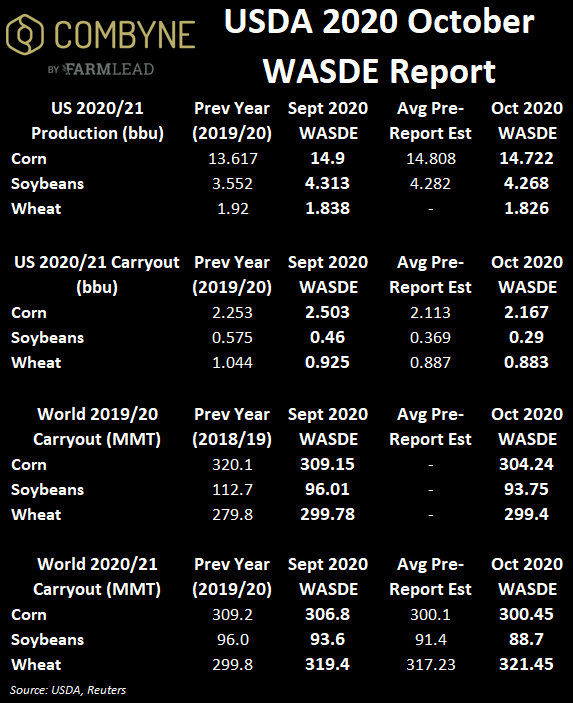 While we knew that ending stocks were going to be lower, given the significant reduction by the USDA in their quarterly stocks report on September 30th, the trade’s pre-report guesstimates were still too high. Compared to their September WASDE, the USDA cut their forecast for U.S. soybean ending stocks by more than a third to now sit at 290M bushels, a five-year low. Helping drive this was an increase in U.S. soybean exports by 3.5% to nearly 60 MMT.

This is important, considering that U.S. soybean exports sales have already hit 40.7 MMT (or nearly 1.5B bushels, if converting metric tonnes into bushels) for the 2020/21 crop year. This is nearly TRIPLE what had been bought by this time a year ago and, for perspective, this amount of sales wasn’t reached last year until May 11th (yes, just 5 months ago, or 8 months into the 2019/20 crop year!).

The one asterisk here is Brazil, which is facing some of their own dry conditions, just as their soybean Plant 2020 campaign begins. Nonetheless, CONAB – Brazil’s version of the USDA – is forecasting a new record soybean harvest of 133.7 MMT, or up 7% from last year’s 124.85 MMT, which is the current record. Further, Brazilian soybean exports, as estimated by CONAB, are also expected to be a record in 2020/21 of 85 MMT, or up nearly 4% from 2019/20’s shipments. For comparison, in the October WASDE, the USDA kept their estimate of Brazilian soybean production and exports in 2020/21 at 133 MMT and 85 MMT, respectively.

Staying in South America, Argentina continues to deal with their own dry issues, and, accordingly, the USDA dropped its estimate for the wheat harvest there by 500,000 MT to 19 MMT, while exports dropped by an equal amount to 13 MMT. With the dryness in mind, it was announced this week that the Argentina government has approved a GMO wheat variety from biotech firm, Bioceres. In doing so, Argentina becomes the first country in the world to approve GMO wheat, which is something that’s been poo-pooed on many times in the past by many countries/consumers. It’ll be interesting to see how the world reacts to this decision, especially Brazil since the bulk of their wheat imports come from Argentina.

Wheat prices acted a bit wild this week on the futures board as speculative money piled into the bullish pressure that the lack of rain is creating: the U.S. HRW wheat belt is now facing its driest conditions since 1979. In that vein, this week, Chicago SRW wheat prices pushed up above $6 USD/bushel, the first time they’ve done so since July 2015! This has translated well for those Canadian producers of low-protein wheat, as indicated by where CPS wheat prices are currently sitting in the Prairies. If you’ve got some you’re looking to market, ensure all your bases are covered, and post it on the Combyne agricultural trading network today! 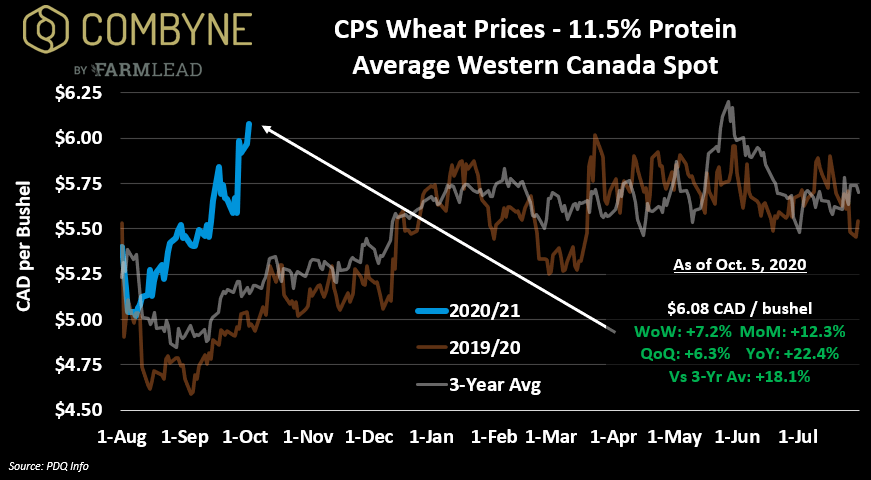 Moving forward in wheat, both the larger Australian and smaller Argentine wheat harvests, we should expect a bit of pressure on the world trade front. This should likely pressure those bullish wheat speculators, especially in Chicago and Kansas City futures. The good news for spring wheat growers is that, this past week, Minneapolis futures held up well against the gains in its SRW and HRW counterparts. Accordingly, there’s more expectation that HRS wheat futures could remain elevated in the coming weeks, while the winter wheat values start to retract.

Ultimately, it makes sense for grain markets to be feeling good/bullish heading into the long weekend – Thanksgiving in Canada and Columbus Day in America. Ultimately, trade flows, harvest progress, and what happens in the next few weeks leading up to the U.S. Presidential election on Tuesday, November 3rd. On that front, the flames continued to get fanned, especially when you try and factor in the COVID-19 pandemic.

As a reminder though, grain prices are looking attractive right now, but the key phrase here is “right now). Thus, I reiterate my suggestion from last week that even if you’ve recently made some sales, consider my recommendation from last week about getting some additional coverage on the balance sheet, be it for nearby delivery, deferred, or even new crop 2021! Regardless, given what we’ve had to deal with this year, you deserve to at least give yourself that extra slice of pumpkin pie this weekend!

A WASDE; now to weather — This week in the grain markets