Grain markets continued their march higher again this past week, as weather concerns, strong demand, and speculative buying continue to support the bulls. Wheat prices have been on a tear, with Chicago SRW values continuing to sit at 6-year highs on La Nina concerns. Meanwhile continued healthy Chinese demand for American corn and soybeans supported their own multi-year highs. Canola tagged right along, with support from palm and soy oil, as the November and January contracts hit levels not seen since the planting campaign of 2013! Speaking of planting though, it’s worth noting that new crop 2021 canola, corn, and SRW wheat prices all fell this past week, a strong indication that, at these current prices, acres are being bought.

Much higher prices for lentils, yellow peas, and flax across the Canadian Prairies are likely buying some Plant 2021 acres as well. This week, on the Combyne Agricultural Trading Network, we saw flax trades in the $17s (per bushel), peas in the high $8s (per bushel), and small lentils above 31¢/lbs and large greens above 35¢  (all prices in CAD). Strong export demand and quality concerns have been driving prices for these commodities, but I’m cautious of calling a top given this intense volatility. That said, it is a lot tougher to catch a falling knife, and so, in these scenarios, one should be selling incrementally into the rally (blocks of 5% – 15% of your production).

Coming back to the futures, as more of the U.S. harvest comes off, I’m expecting to see some heavy selling from farmers. With corn prices playing around at $4.20 USD/bushel on the futures board, note that whenever we’ve gotten near these levels in the past, there’s been a lot of producer selling. However, when we’ve been at this price range, it’s usually during the summer, when trading spreads between corn and soybeans are volatile. That said, many analysts agree that if the current spreads in corn and soybean markets remain intact, this rally will continue.

Further adding support to corn prices though this past week was more export sales, 1.83 MMT in fact, which was well above the trade’s expectations. This in mind, considering that China has bought about 12 MMT of corn from the U.S. now, and an estimated 5 MMT from the Ukraine, it’s widely expected that Beijing will raise their quota for corn imports. Basically though, they must increase them, given that the current quota is for just 7.2 MMT. Further, while companies can import corn that is not part of the quota, Chinese government import tariffs as high as 65% can be applied. From an actual shipments standpoint (to all destinations), U.S. corn exports are now more than double what they were a year ago through Week 6, with nearly 5.4 MMT sailed! 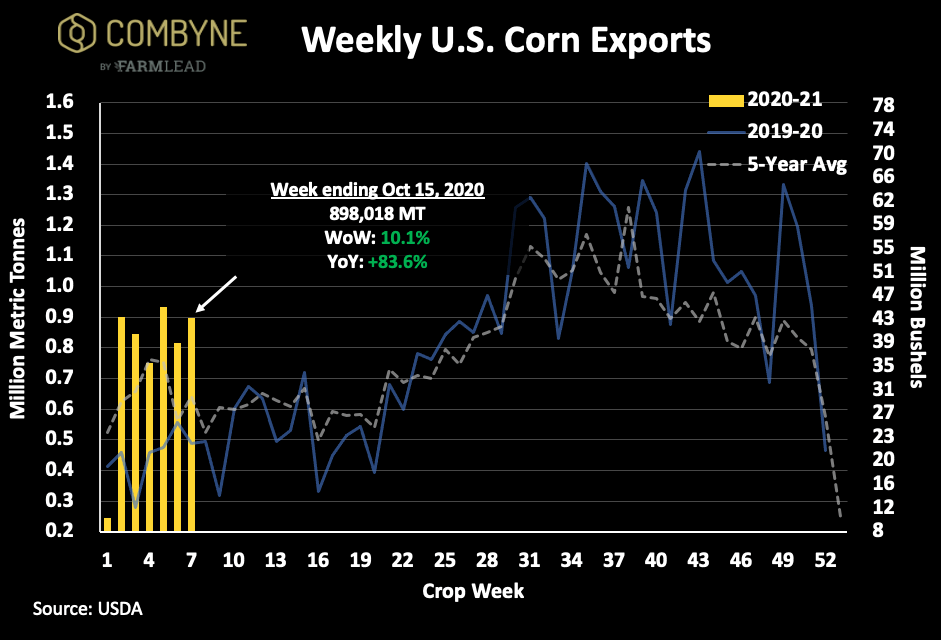 That probably helps explain why, through this past Friday, corn prices are up almost 11% since the start of October. Just behind corn is Chicago wheat prices, which are tracking nearly 10% higher since the start of the month. We don’t yet know where Chinese corn demand is going to be capped, and while it feels a bit top-heavy already at this point, I’m still cognizant that a cheap U.S. Dollar and record domestic corn prices in China do suggest that Chinese demand will stick around for a bit longer.

Ironically, even though SRW wheat prices on the futures board continue to sit at their best levels since 2014, they may actually have more upside than corn, as speculators are piling onto the La Nina train. Driving this is the smaller crop in Argentina, as the Buenos Aires Grains Exchange dropped its estimate for the 2nd straight week, this time by 700,000 MT, down to 16.8 MMT. Competing firm, the Rosario Grains Exchange is currently sitting at 17 MMT, while the USDA pegged the Argentine wheat harvest at 19 MMT in this month’s October WASDE report.

Then if we add in the dryness in the U.S. Southern Plains and the Black Sea, there is some real buzz growing about the production potential of the 2021/22 global wheat crop. As you know though, a lot can happen in the next few months. Thinking more short-term however, we got word this week that Ukraine has already shipped about 57% of the wheat quota that the government has suggested to the markets. Thus, the bulls are frothing at the mouth and hoping for the Ukrainian wheat export industry to go quiet later this crop year (or any other Black Sea country for that matter).

Finally, canola prices have been on a tear, and I keep hearing, “I pulled the trigger too early” across social media and even our Combyne users. No, you didn’t; you made a business decision based on the information you had available to you. You have to move on from it and make sure you understand the new set of information to be able to make an educated decision for that next sale, which, in my opinion should be sooner than later. Let me explain why.

First and foremost, Agriculture Canada updated their supply and demand tables this past week, and in it, they increased canola ending stocks again! This is largely because they have now found almost 1 MMT of extra production that wasn’t known to the market just 2 months ago! Because of this and some other demand finagling, 2019/20 ending stocks, according to Agriculture Canada, are now pegged at 3.13 MMT, or 1.3 MMT higher from their estimate in August! Carrying that extra supply from last crop year to the current one is pretty significant, as shown in the chart below. 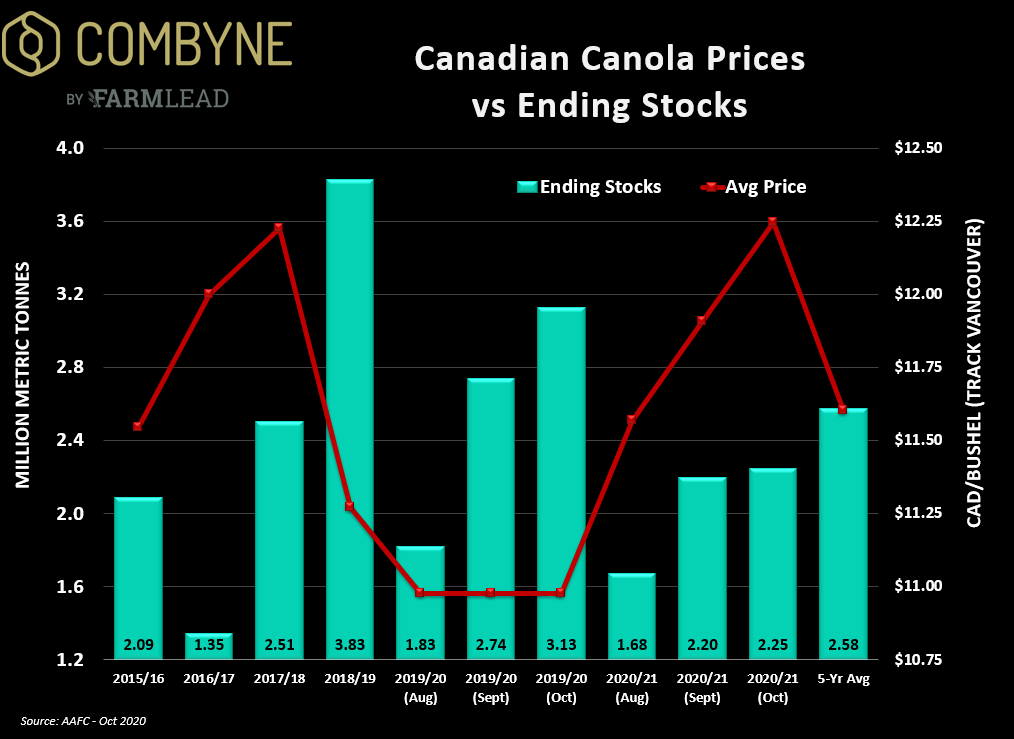 The saving grace here though for all this extra supply is the fact that exports also have been increasing, and that this year’s crop doesn’t seem to be as big as once thought. In that vein, Agriculture Canada has added an extra 700,000 MT of extra export demand in the last 2 months. Currently, thanks to the small rapeseed crop in Europe and general COVID-19-related over-buying, 2.53 MMT of canola has been exported through Week 6, which is 46% higher year-over-year and a record start to the marketing season. 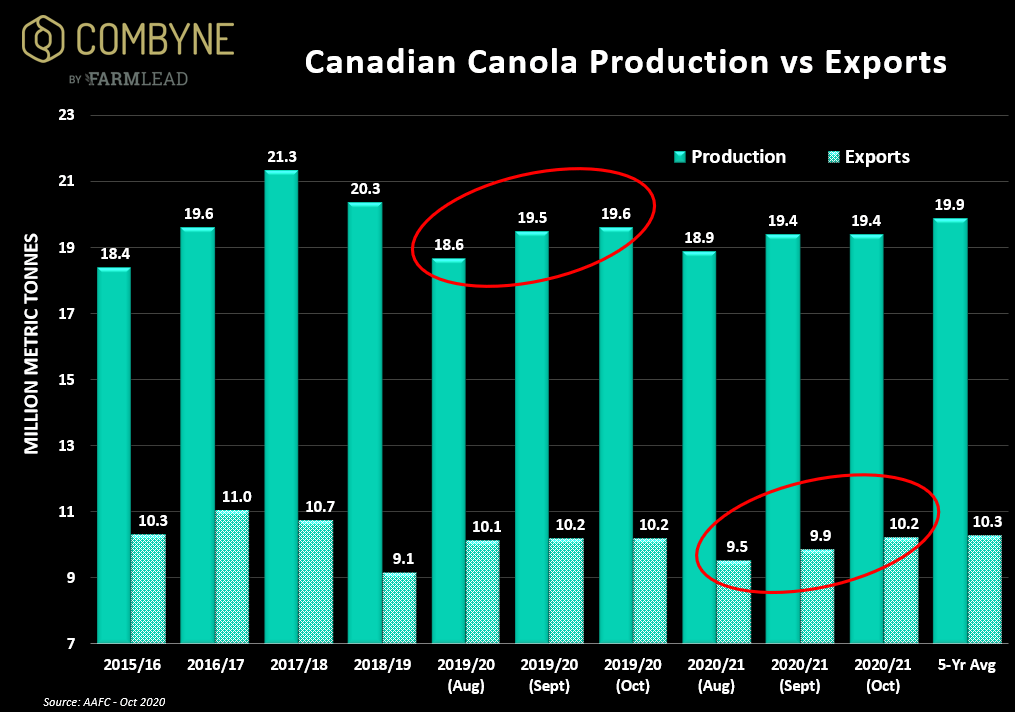 If this current pace were to continue, we’d end the 2020/21 crop year with something like 13 – 13.5 MMT in canola exports. But, let’s come back to reality and admit that this isn’t going to happen, because, as Canadian canola prices rise, other, cheaper vegetable oil crops become more financially attractive and substitution effects start to take place. Bottom line is that I think canola prices are in this weird world of trying to determine how much smaller this year’s crop actually is, while demand is clocking along at record levels. Add in some speculative buying, and you see the rally that we’ve had!

Accordingly, while I’m not doubting the potential for some further gains in the coming weeks, I’m more aware of the fact that 2020/21 ending stocks are likely to end somewhere around 1.8 – 2.1 MMT. This is a healthy amount and refer back to that ending stocks chart to see where prices have been at these levels (hint: 2015/16). Finally, since today’s canola prices are clearly buying acres for next year’s crop, and that new crop canola futures dipped this week, I’d say we’re much closer to the top of this rally than coffee row is telling you! Thus, keep that incremental selling in mind!

Another Kind of March Madness — This Week in the Markets

Taking a breather with Easter — this week in the grain markets