The Ontario Federation of Agriculture’s board of directors has elected Thunder Bay, Ont., dairy farmer Peggy Brekveld as its new president.

Brekveld takes over from Keith Currie who has led the general farm organization for the past four years.

For the first time in OFA history, the president and executive committee was elected by the board of directors. This process was made possible earlier in the day after 88 percent of delegates attending the organization’s virtual annual meeting voted to ratify a new OFA bylaw to approve the change of governance. 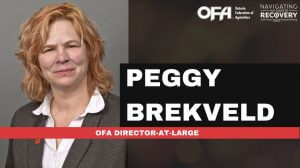 Brekveld is the OFA’s 32nd president and the third female president in the organization’s history. She will serve in the position for a one-year term.

“I look forward to working with our entire team across the organization to continue to bring the message that agriculture is the number one industry and economic driver in Ontario,” said Brekveld in a press release. RealAgriculture will have a feature interview with the new president on Tuesday, Nov 24.

Brekveld previously held the position of vice president of OFA for six years.  She also serves as vice president of the Agricultural Adaptation Council. Recently recognized as one of the six 2020 Influential Women in Canadian Agriculture, Brekveld and her family own and operate Woodstar Farm, a 75-cow dairy operation near Thunder Bay.

OFA also announced that Mark Reusser has been re-elected by the board of directors as vice president for his fifth term. Drew Spoelstra will fill the second vice president position. Crispin Colvin will round out the executive committee, holding the position of executive member.