The year of 2020 will be remembered for many years by the cattle industry in Canada.

Following the COVID-19 plant shutdowns in spring, the industry struggled to find solutions to deal with a backlog of cattle, and ultimately looked back to 2003 and the BSE crisis to find a solution. The idea of a similar BSE-era set-aside program gained traction among ag leaders, and government agreed to roll it out as one of the solutions to assist producers.

As a result, several provinces, including Alberta, Saskatchewan, and Ontario started offering cattle producers compensation to hold back cattle from processing.

After a slow start, the program in Alberta has gained in participation (see below) for a number of reasons. The Saskatchewan numbers have never been made public.

The volumes of cattle accepted into the Alberta program have been variable, but were higher in October than September, which in turn was higher than August. 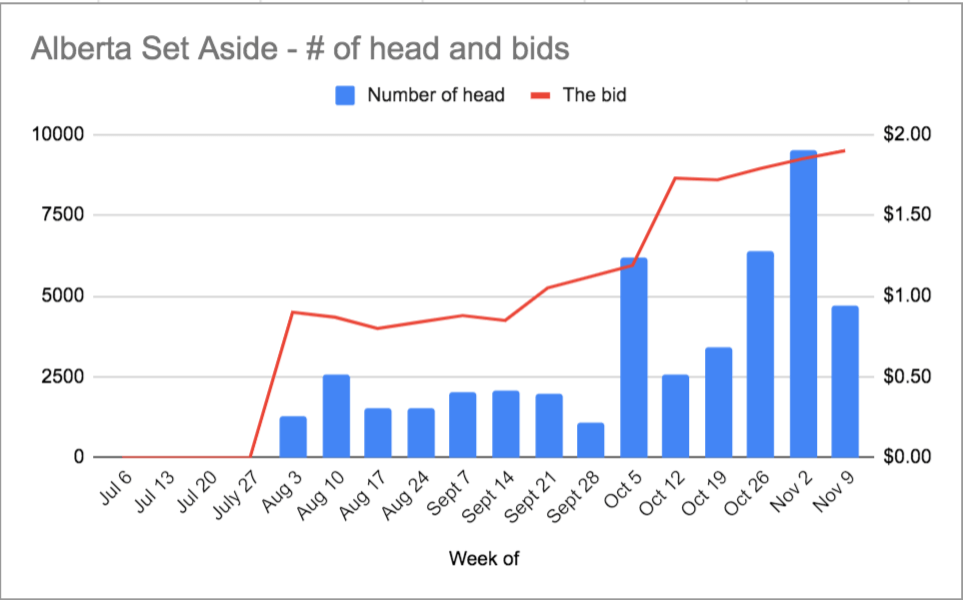 As time has marched on, the U.S. has remained much more current than the Canadian industry.  Canadian packers have been running at a very healthy kill capacity, but carcass weights have trended higher (see below left). 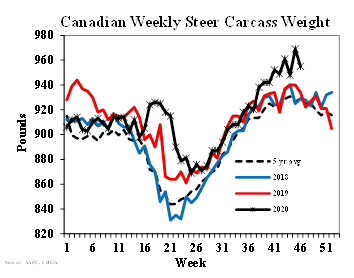 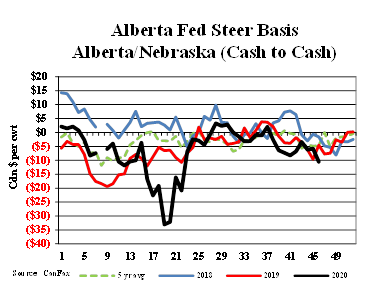 Carcass weights through July, August and mid September were similar to a year ago (after getting fed slaughter back on track in June to date), but weights are now into record high territory. Even though fed slaughter has remained above year-ago levels, it has not been enough to clear cattle through the system.

The system cannot afford domestic demand or exports to falter too much through the second wave of COVID-19 as pressure remains on the packer to get back to current as soon as possible and to not have any excuses to cut back on processing hours. As the second wave of COVID-19 threatens further shut downs of the economy, packing plants are working to prevent a repeat of the spring COVID-19 outbreaks among the plant workers.

Evaluation of the 2020 set-aside program is easy in hindsight and the entire reality is yet to play out for the entire value chain, but all components of the value chain will agree that getting back to a “normal” market is ideal.

Beyond Scavenging: When Ravens Prey On Livestock

Stretching Hay Supplies While Being Patient for Pasture Regrowth