Grain markets moved into the second half of November largely in the green, thanks to USDA sharing some bullish data in their November WASDE report. Soybean and canola prices continue to reach new multi-year highs as export demand remains strong, stocks continue to tighten, and weather concerns remain for the South American crop. Wheat prices pulled back as reports that Russia would start limiting their exports in February were denied.

In outside markets, everyone and their mother had a few deep sighs of relief earlier this week on the positive news about COVID-19 vaccine developments from Pfizer. That optimism has faded though as the public and investors alike have started to realize that the distribution of the vaccine isn’t going to happen tomorrow. In the meantime, COVID-19 cases continue to rise in many countries, prompting fresh lockdowns and obvious negative economic implications.

Back on Tuesday, November 10th, the USDA released their November WASDE report, surprising most of the market with some bullish numbers. Going into the report, most market participants were expecting to see some sort of updates to demand and maybe some yield adjustments, but the adjustments were pretty significant. For production, average U.S. corn yields were lowered by 2.6 bushels to 175.8 bushels per acre (bpa), which was nearly 2 bushels below the average pre-report guesstimate from analysts. Similarly, American soybean yields were lowered to 50.7 bpa, a drop of 0.8 bushels from the October WASDE and, again, a healthy deviation from what the market was expecting to see.

This had some serious implications to the balance sheet, as the lower production numbers clearly have to have an impact on carryout, but this downgrade in the crop was significant. Combined with the USDA raising their estimate of corn exports by 14%, U.S. corn ending stocks were dropped 21%, or 465M bushels from the October WASDE (or 11.8 MMT if converting bushels into metric tonnes). In the past 25 years, only in 2010 did the USDA drop their estimate of U.S. corn production by more than 5% from the August to November WASDE reports! With a print of just over 1.7B bushels, this is a 7-year low and 300M bushels below what the market was expecting, thus helpful for corn prices. 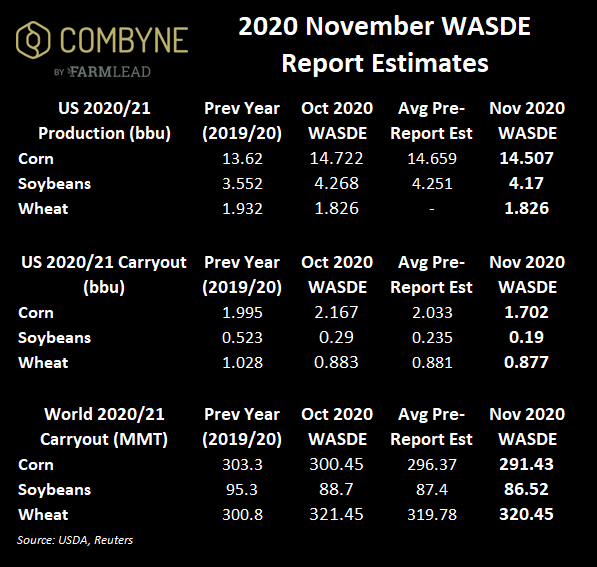 Similarly, soybean ending stocks saw a major adjustment lower, dropping by 100M bushels down to 190M bushels, the smallest number since the 2013/14 crop year when U.S. soybean ending stocks were just 92M bushels. Worth noting is that in that crop year, the U.S. soybean stocks-to-use ration was 2.6% and this year’s it’s projected by the USDA to be 4.2%. Adding to the bullish fever for soybean prices is the NOPA crush report for October set to be released on Monday, and the market is expecting to see 177.123M bushels used. If that estimate is realized, it would be the second-largest volume of soybeans crushed ever by NOPA members and nearly 10% above the September number.

For the wheat market, we saw the USDA raise ending stocks for both American HRS wheat and durum inventories, but the bullish buzz that caught some wind this week was that Russia may start to limit their wheat exports starting in February. I mentioned this week in my Wheat Market Insider column for the Alberta Wheat Commission that fresh supply from the southern hemisphere is coming to market, namely Australia and Argentina.

For the latter, I’ve said for the last few weeks that the size of the wheat harvest there seems to be getting smaller, not bigger, and fresh estimates continue to validate my call. While the USDA dropped their wheat harvest estimate down to 18 MMT, the Rosario Grains Exchange said yesterday that they’re not expecting a 16.7 MMT crop. This is a drop of 300,000 MT from their previous estimate and 100,000 MT lower than the 16.8 MMT estimated by the Buenos Aires Grain Exchange earlier this week.

Staying in South America, we’re getting into the thick of the Brazilian first-crop growing season and while dryness concerns continue to be discussed, production estimates continue to climb. While the USDA kept their estimate of the Brazilian soybean harvest at 133 MMT, CONAB (the USDA equivalent in Brazil) raised their forecast slightly to 133.7 MMT. Clearly something has to give, and my guess is that it’s going to be that these weather concerns are going to start fading a bit. That said, if production estimates out of Brazil start to fall a bit, this will obviously continue to tighten world ending stocks.

Thus, all this bullish sentiment isn’t going to go away immediately since COVID-19 supply chain concerns remain high, demand continues to be strong. This in mind, the USDA did not update their estimate of U.S. soybean exports. The UDSA did, however, raise their expectations of China’s corn imports to 13 MMT, but it’s not the 22 MMT that their attaché in Beijing said was more likely. It’s worth mentioning that many analysts continue to interpret President-Elect Biden’s win as bullish for the likes of corn and soybean prices because he is friendly with China (albeit some would argue, maybe too friendly…).

To wrap things up, this weekend’s column will be my last on RealAgriculture.com as we’ve started to see some really impressive traction on our agricultural trading network, Combyne, and I’ll be focusing more of my time helping farmers and buyers on there. You’ll likely still hear my perspectives on grain markets from time to time, be it on RealAgriculture.com or grain markets webinars I’m hosting, albeit the first seats will be reserved for Combyne users. Hope you’ve enjoyed my insight – ideally benefited from it – and if you’d like to continue to do so, join me on Combyne!