Farmers Edge is preparing to become a publicly-traded company.

The Canadian digital agriculture business, which was co-founded by CEO Wade Barnes at Pilot Mound, Man. 16 years ago, has submitted a preliminary prospectus with authorities in each Canadian province and territory, and received a receipt for an initial public offering.

In the prospectus, the company estimates its initial offering size at approximately C$100 million, and up to $115 million if an over-allotment option is exercised. Farmers Edge says its anticipated offering price is between $10 and $17 per share.

The shares would be listed on the TSX under the symbol “FDGE.”

It says it intends to use around half of the IPO proceeds to strengthen its financial position and to pursue growth strategies. An undisclosed amount will also go to pay off debt to certain Fairfax shareholders.

Fairfax is one of several major investors in Farmers Edge. Osmington and Mitsui & Co. are also major external backers.

As of December 31, 2020, the company says its agtech products are deployed on 23 million acres of farmland. 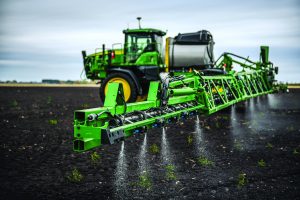 One thought on “Farmers Edge set to become publicly-traded”