It’s been a wild week in the equity markets, dominated by the short squeeze placed on Gamestop and a few other heavily shorted stocks. Gamestop was up 400% in the last five days trading from $65 last on January 21st to close at $325 on January 28th with an inter-week high of $505.

Was this wild action created by SPAC activity, surprise earnings, or a potential stock split? No, instead, the pricing launch was caused by individual traders using Reddit and Robinhood to work as a team in order to force a short squeeze on some very sophisticated hedge funds.

Gamestop was 120% shorted by the market, which allowed for this unique situation to transpire. One of the hedge funds on the losing end was Melvin Capital with losses in the billions.

It’s only a matter of time before they come after the #soybeans and #corn………. Scary thing is they(soybeans and corn) actually have a bullish story behind them……. Kind of frighting. https://t.co/Xw0zqhUj0m

Watching this happen to the likes of Blackberry, AMC, and Gamestop begs the question: could this same kind of event happen in the ag commodity market?

Funds like to play both sides of the ag commodity complex, pushing it up and down which can help or hurt farmers depending on your position.

On the Agritalk PM show on January 29th, Tommy Grisafi, from Advance Trading, provided some historical anecdotes of the Hunt brothers attempting to corner the silver market. Grisafi mentioned that there was talk on Reddit this week of the size of the shorts in silver and whether a repeat of Gamestop was possible using silver related ETFs.

On Monday, Feb 1, silver rose almost 12% to $30.07 in London after novice traders who drove up GameStop turned their attention to metals. The price is silver’s highest since December 2012 according to Barchart.  According to a Bloomberg report, hedge funds are 25% of the open interest net long.  Unlike Gamestop that has fiscal challenges which warranted the short activity, silver is has an “underlying bullish” story to it already so this attention from Reddit is “good for the silver bulls,” according to Jonathan Farro of Bloomberg Radio. 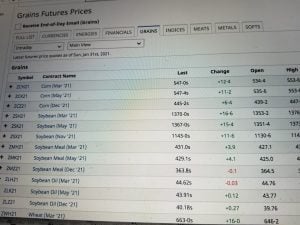 Grisafi stated, “I promise you that, between the exchange, the CFTC and the NFA, this will never get out of control in the futures market and that’s because if you look back at history the Hunt brothers tried this in silver. And, besides, if they [Reddit users] are looking for big shorts, funds are record long corn, so if they wanted to hurt them they would sell it which would require using options.”

There are also major differences between commodities and equities in the sense that grains, for example, have no defined limit on supplies and there’s substitutability compared with stocks in a company that are finite, which makes the forced short squeeze much more difficult.

Regardless of whether this situation is transferrable to the commodity complex, it is a fun debate provided you are not on the wrong side of the trade, which is a never a fun place to be.

An Inside Look at the Producer Car Allocation Process

Dry, dry weather, bullish soybeans, and will we get a Christmas surprise? – a LIVE! with Ted Seifried