The Manitoba government announced its plan to start eliminating education taxes on property, including farmland, in its 2021 budget unveiled on Wednesday.

The province says the education property tax burden on residential and farm properties will be reduced by 50 per cent over the next two years — 25 per cent per year in 2021 and another 25 per cent in 2022. Other types of property will see a 10 per cent reduction.

Farmers and farm groups in Manitoba, such as Keystone Agricultural Producers, have called for education taxes to be removed from property tax bills for many years — going back to the 1980s in the case of KAP.

The school tax issue has intensified over the last decade, as the amount paid by Manitoba farmers has escalated — as much as $30/acre from one year to the next in some cases — as farmland values have appreciated. In some instances, residential and commercial property owners have seen their school tax bills drop, as school board revenues have been offset by rising farmland assessments.

“Manitoba is currently the only province that utilizes locally-determined municipal school property taxes to fund its education systems. This has perpetuated inequalities and contributed to differential outcomes in learning for children, depending on where they live. Addressing education property taxes will modernize Manitoba’s tax structure and put all Manitoba children on an equal footing regardless of where they live,” said Finance Minister Scott Fielding, in the budget speech on Wednesday afternoon.

The PC government says the reduction in 2021 will come in the form of a rebate cheque from the province, as local school divisions will still generate revenue from their levy on property tax bills. The province says no application will be required, and property owners should receive their cheque before municipal property taxes are due.

In total, the province anticipates sending out $248 million in rebates in 2021.

The graph below, provided by Manitoba Finance, shows how the new Education Property Tax Rebate will work together with the Farmland School Tax Rebate. The net result should be a lower school tax burden on farmland. 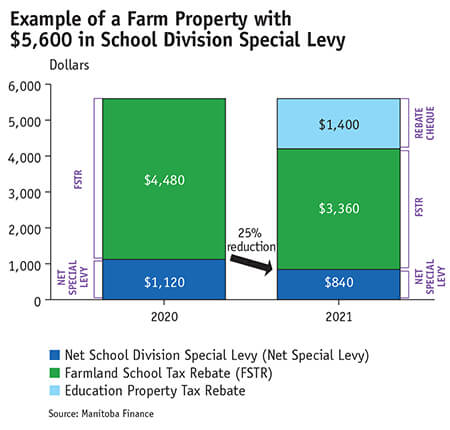 While the province says further increases in rebates will be reviewed as part of future budgets, the 50 per cent increase by 2022 represents a quicker start to the process than the 10-year timeline that’s previously been discussed by Premier Brian Pallister.

The move to phase out education property taxes is part of the Pallister government’s overall plan to reform the school system that includes the elimination of school divisions and local school boards, which currently administer school taxes on municipal property tax bills.

The 2021 budget includes a $23 million grant for school divisions, which the province says is equal to a two per cent property tax increase and describes as an initial step in “the transfer of direct funding responsibility for education away from property owners.” The province has also committed to increasing education funding by $1.6 billion over the next four years.

Overall, the budget unveiled by the Pallister government on Wednesday proposes a $1.6 billion deficit for the 2021-22 fiscal year, down from a deficit of $2.1 billion last year. The budget for the department of agriculture and resource development was set at $441 million, down slightly from last year’s budget of $445 million.

One Week Left to Win Keys to the Combine

Carey joining CCGA as VP of government and industry relations