Resistance to Group 2 herbicides has been common and assumed in many cases with kochia in Western Canada for years, but weed survey results show glyphosate (Group 9) resistance in the invasive tumbleweed species has exploded in recent years.

In 2013, less than 1 per cent of kochia populations sampled by Agriculture and Agri-Food Canada (AAFC) in Manitoba were resistant to glyphosate or Roundup. In 2018, that number rose to 59 per cent.

And those cases have been found across most of Manitoba’s crop-growing region, as shown in a new map published by Manitoba Pulse and Soybean Growers, which combines data from AAFC and testing done through Manitoba Pest Surveillance Initiative lab from 2015 to 2020 (see map below).

The percentage of glyphosate resistant plants was highest in fields where Roundup Ready soybeans (77 per cent) and corn (70 per cent) were grown.

All of the kochia samples in the 2018 survey for Manitoba were resistant to Group 2 herbicides — no surprise, but adding to the concern about the loss of glyphosate as a control option is the threat of Group 4 resistance.

AAFC has already confirmed Group 4 (dicamba and fluroxypyr) resistance in kochia in Saskatchewan, but Schmidt says they’re awaiting COVID-delayed results for Manitoba: “We need to know if it’s susceptible to dicamba or not.” (continues below video)

Down the road, Schmidt says Group 14 resistance is also on the radar.

“We’re kind of anticipating Group 14 resistance to be the next one because those are the herbicides we’re really leaning on right now to control kochia. There’s a lot of selection pressure there,” she says, urging growers to layer pre-and post-emergence options while mixing up modes of action where possible.

Pre-seed weed control — a soil-applied herbicide and/or a spring burndown with some residual activity — is critical, says Schmidt. She also suggests considering a tillage pass to control early flushes. Anything that maximizes crop competitiveness — narrower row widths, higher plant populations, and appropriate fertility, including not feeding nutrients to kochia thriving in saline areas — can also be beneficial.

Kochia is a prolific seed producer, but most of those seeds are only viable for one or two years, so Schmidt recommends anything that cuts down seed production when it comes to kochia control later in the season, whether that’s mowing, baling, grazing, spot tillage, burning, or hand-pulling. “If we can manage the amount of seeds going out there, we’ll be able to manage this weed a little better,” she says.

While glyphosate resistance is becoming more common, she says growers should still try to have plants tested to confirm what they’re dealing with.

“I think it’s still worthwhile getting it tested from your field to know where you’re at because you can have a whole population range in your field. You can have susceptible as well as resistant, and we want to target not moving toward more resistance,” explains Schmidt. 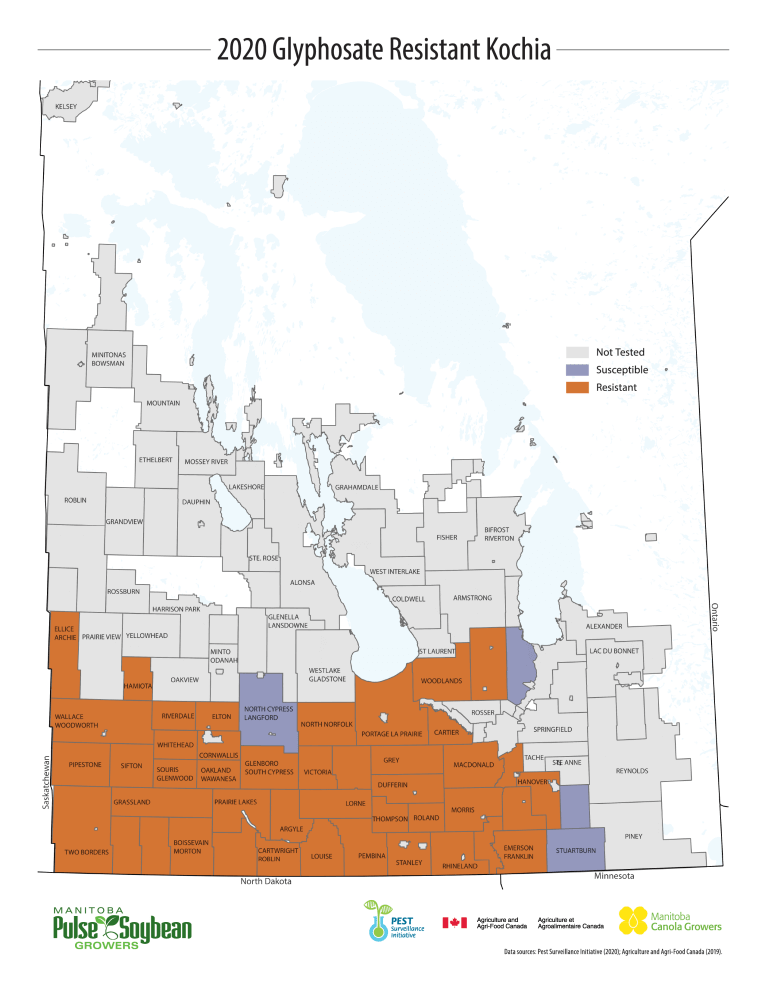