Several reports of poor regrowth on second- or later-year alfalfa in the Niagara and other Ontario regions seems to be caused by one culprit: alfalfa weevil.

Agronomists are reporting scouting fields that have already reached threshold for the pest (see photos below). Because of early season heat, some established fields of alfalfa were cut relatively early this year and were slow to regrow. Scouting these poor fields revealed alfalfa weevil as the culprit. 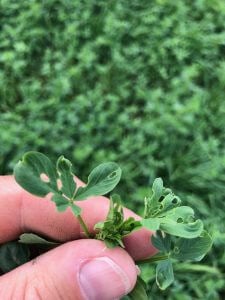 As to why the weevil is having such a devastating impact already, resident RealAgriculture agronomist Peter Johnson says that mild winters can increase adult survival, as they live in crop debris. In a more typical year, wetter conditions increase levels of beneficial pathogens to keep numbers in check, however the cold April and May temperatures may have slowed development of the pest, and adults emerged a little later.

This year’s earlier than normal hay harvest due to dry weather and advanced grass stage, means that a lot of alfalfa was harvested before bud which is typically peak larval attack, Johnson says.

Tracey Baute, field crop entomologist with the Ontario Ministry of Agriculture, Food and Rural Affairs, says she’s also getting several reports of the pest. Baute says that fields should be scouted twice a week at least, but fields at greater risk including those that were seeded last year, pure alfalfa stands, and areas of the field with south facing slopes, should be scouted first and possibly more often (story continues below).

For later harvested fields, such as what Drew Thompson talked about in Niagara, fields go “silver” or “white” because weevil skeletonize the leaves, the highest quality part of alfalfa. In early harvested fields, they eat all the regrowth and can severely damage stands (see above). 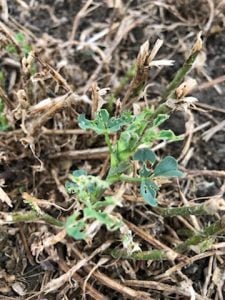 The economic threshold for control is 40 per cent leaf tip feeding and two active weevils per stem in mature alfalfa that will not be harvested for seven to 10 days. But it really comes down to the height of the crop, Baute says, which after a cutting can be really vulnerable if the pest population gets ahead of regrowth.

Scouting is best done in the early morning or closer to evening as the larvae may be less active during the heat of the day, Baute says. Scouting in early morning or closer to evening is always good as larvae may be less active in the middle of the day, if temperatures are high. It is the larger larvae that are used for determining thresholds. The smaller first two instars won’t do as much feeding damage, she says.

Sweep nets can give you a quick indication as to whether or not the larvae or adult weevil are present, but thresholds are based on pulling plants and knocking them in a bucket to establish larvae counts.

Baute adds that ladybeetle adults love to eat young larvae, as do other predators like spiders and damsel bugs. There are parasitoids (in this case, tiny wasps) that are really important too, which is why the best control is to cut the stand to conserve quality and knock back the pest.

The threshold in harvested alfalfa just beginning to regrow is two larvae per crown or four larvae per square foot.

Canola School: Verticillium stripe continues to widen its path across the Prairies