Two, and in some cases, three nights of frost in Ontario has hit the soybean crop quite hard. In some eastern counties, re-planting is already underway.

The corn crop did not escape unscathed either, though some agronomists and farmers are more hopeful that many corn acres will recover.

Paul Hermans, area agronomist for Corteva, covers the area from Trenton, Ont., to the Quebec border. The area was hard hit by two nights of -1 and -2 degrees C.

Hermans says that the worst-hit counties include Prescott-Russell, north west Ottawa-Carleton, and Renfrew. In his 24-year career with the company, he says it’s the worst frost event he’s seen in terms of total acres affected.

“I expect seven to 10 per cent of soybean acres to be replanted,” he writes in an email to RealAgriculture. “Most years, a ‘bad year’ is considered one to two per cent.”

As to why the frost event was so hard on beans, Hermans says that it hit a very large geographic area two consecutive nights in a row plus a third cold night. The overly dry conditions of May negatively impacted the soil temperature-holding capacity of all soil types, not just the more typical muck or sandier soils. No-till acres seem harder hit, as well.

Some of the corn crop in the area will likely grow through the damage, he says. Much of the corn was at the V3 stage (collar method) and so the growing point is still below ground. Those with damaged corn may have to be a little patient to see just how severe the damage is. 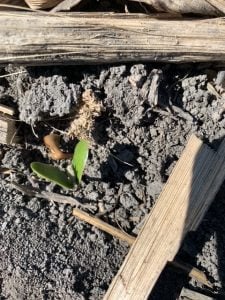 For areas of Renfrew and points north, the corn crop was not as lucky. Charlene Whattam, territory sales manager for Bayer, based at Renfrew, says that areas of New Liskeard had temps as low as -7 degrees C. Nothing made it through and many farmers are in a re-plant position. But in the Renfrew area, some soybeans were hit but the effect was variable. In the same row, she says, some beans are untouched and others are dead, making the replant decision more complicated.

In the southwestern portion of the province, frost damage does not appear to be as severe as in other regions. “I think we really dodged a bullet,” says RealAgriculture agronomist Peter Johnson. He’s seen tremendous leaf damage on corn, but it’s primarily scald — the product of an extremely cold night followed by a really intense sunshine the following day. The tissue that was injured from scald was then killed by a second night of cold temperatures.

Pioneer agronomist Greg Stopps travelled his territory, north of London, after the frosty weekend and noted that damage levels depended on which direction he was driving. Overall, most of the corn and soybeans were fine, but as he travelled northeast toward the Owen Sound area “it’s more clear-cut where the beans are done and will have to be replanted.”

Johnson notes that in corn the growing point was still under ground. “So where it did get frozen, it’s still okay. But the soybeans that got damaged could well be dead because the growing point is above ground.”

When it comes to replants for soybeans, OMAFRA soybean specialist Horst Bohner is advising growers to exercise patience. “When we get into a scenario where it’s obvious there’s been frost… we can make the decision too quickly to condemn a field because some plants are still emerging.” He notes that even when the cotyledons have been frozen off, if the growing point has been protected, new growth will emerge.

Bohner says growers need to wait five or even seven days to see if there’s new growth. He adds that the vast majority of these plants will yield just as well as soybeans that haven’t had a frost.

Bohner says growers should consider replants when plant populations fall below 90,000 per acre or a little higher on heavy clay soils. Row spacing is also a consideration. “If it’s a nice consistent even stand in 30-inch rows you could probably go as low as 70,000 plants. But in that range we’re going to have to thicken things up or start over with a full seeding rate.”

With a large soybean area potentially being replanted, growers are also asking about seed supply and availability. Stopps says seed supplies will depend on growing maturity. The industry tends to have good stockpiles of maturities 1.5 and up. There is also significant seeds supplies produced for the 1.0 maturity. However, seed supply is tighter in the 0 and 00 groups — where most of the replant demand will be concentrated.

Hermans says that while this is a tough one, it’s a one in 24 year event. For perspective, there is still much more to be gained 23 years out of 24 by planting early than waiting to plant for fear of frost.

“Research shows that we have gained three to five bushels an acre by planting soybeans May 1 to 5 compared to May 15 to 20. There’s more to gain in 23 years than losses in one!” he says. The crop will have amassed 69 to 115 bushels per acre over that period, which more than covers the cost of one year of replanting.