What’s the weirdest colour you’ve ever seen a crop turn?

This week in Ontario, at least one farmer is reporting very dark straw where the wheat crop was touched by frost in late May. An agronomist also reports purple stems in another area. What the heck is happening here?

Never fear, as Peter “Wheat Pete” Johnson is here with this week’s Word, and he’ll explain what the heck is happening to wheat stems, plus offer up not one but two crop alerts: one for soybean aphids, and the other for white mould. 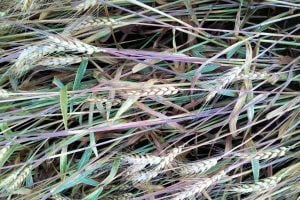 Pulse School: What you need to know about the critical weed free period

Selling hay to the UAE: Challenges and Opportunities

By Christina Franc Canada exports 600,000 tonnes of forage each year, with an estimated value of $150 million. This market is continuing to grow, particularly in the United Arab Emirates. Selling hay to the UAE opens a world of possibilities, and a world of possible problems, says Alan Gardner of Haydar Group of Companies. None…