I am going to tell you a story. It’s a story that probably will leave your mouth agape and thinking, “People wouldn’t actually do that, would they?” But I assure you, this story is true.

Last Wednesday, our employee at our second solar grazing site (about 1.25 hour drive from the home farm) texted to say that he couldn’t find our male livestock guardian dog. It’s a big site — about 100 acres — and we didn’t panic right away. But, on Thursday morning, the dog was still nowhere to be found, and something seemed off.

We had good reason to be on alert. Just a week before, someone had taken a photo of our livestock guardian dog in the site and posted it on the local Facebook page asking if someone’s dog was “caught” in the site. Our employee saw the post, but it was soon removed, after the person realized the dog was meant to be there. The post was up long enough, however, for at least one person to, as our employee said it, “get a little crazy” with the comments. The main concerns were that the dog was alone (which, is true if you don’t count his flock of sheep and pack mate and the daily or more checks on all of them), and had a chain on his collar (it’s a dangle chain, and has a purpose, which I will explain at the end of this post). 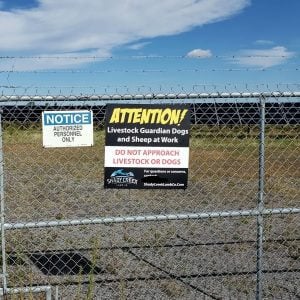 That incident made us realize we likely should get some extra signage up at the site and make sure that local people could find our number if they had questions about our dogs or sheep or solar grazing, in general.

When my partner, Chris, arrived Thursday morning on-site, he started looking around. Soon after, he found what appeared to be dog food along the outside fence of the site. Not good, for a few reasons.

One, it confirmed our suspicion that someone was interfering with our dogs, and two, leaving “food” out that our livestock could eat? This raised alarm bells — for one, sheep are highly sensitive to copper, and gorging on salty “dog food” could also lead to bloat (our sheep are on full grass). But also, who knows what’s in that food? Food that could be consumed by our livestock. You know, part of our food supply.

Back to the story.

At this point, I hopped on the town Facebook page and posted an introduction to us, our farm, and that our guardian dog was possibly lost, but likely stolen.

Immediately, the good people of the town shared what they knew — mostly that they had seen the dog and wondered why he was there. There were plenty of comments about enjoying seeing the sheep there and well-wishes that we would find him. Most people shared the post.

One person immediately began spouting off about how the dog had been “without food” for four days. This is false of course, as our dogs are checked on at least daily and are fed daily and have access to water at all times. The site is 100 acres; there’s no possible way someone outside the fence could ever see where we feed the dogs or how much. And so, from that perspective, I understand where people could make assumptions.

Nonetheless, this person was not keen on how we cared for our dogs, so I asked a few more questions. I conveyed that we were filing a police report, as the left out food and a stolen dog from a livestock protection zone were in clear violation of Bill 156, The Security from Trespass and Food Safety Act which became law in June 2020.

Soon after, this same person tagged someone else and said that perhaps their sister should call me.

I did what any good Facebooker would do, and direct-messaged said person, asking her sister to call me. She, in turn, denied having the dog (which is not what I asked) but then proceeded to tell me it was “cruel” to have a dog in the solar site, that the dog shouldn’t be “alone,” and that they were underfed. She also said her sister did not have the dog.

Then, after some back and forth and this person commenting on the public post about not having the dog (and how terrible I was for accusing her of such)…her sister arrived at the solar site to return our dog.

We are of course, incredibly relieved to have our dog back. He’s a valuable team member. Our livestock guardian dogs are really the only reason we can have a grass-based flock. Without them, the coyotes would move in and decimate the flock. These dogs are respected and loved by each of us — and yes, they are fed. They receive vet care as needed. They love their sheep and want to be with them at all times.

There’s a second part to this story. As outlined, a crime or possibly crimes has been committed, in accordance with Bill 156.

We did call the Ontario Provincial Police. My partner explained the situation. The police officer was unaware of the laws, and we did our best to share the resources we had on hand regarding the Act.

From our perspective, the officer didn’t share our concern or seem to think the theft was as serious as it was. He said, and I quote: “You should be happy you got your dog back.”

Which we are, but by that logic, if I steal his police cruiser, but return it, no crime has been committed.

In a follow-up email, the police officer said: “I spoke with the owners of the land and have dealt with the lady that has been leaving food at the property. Please be advised that this case is closed and that if you have anything else to report, call 911.”

I recognize that The Security from Trespass and Food Safety Act is relatively new law. I recognize that our dog has been returned. I recognize that, likely, the person or persons involved in this crime very likely just wanted our dog and not to interfere with the food system (as evidenced by their taking of the dog, not calling bylaw or the SPCA with their concerns). I recognize, too, that the officer considers this a case of a missing pet, and not something more serious.

But, according to the law, it very well may be. And, according to us, this entire incident has put us on edge, made us angry, made us stressed for our dog and our sheep, and realized a major vulnerability of our livestock (and our food).

After all, if we have laws to protect our food supply, but they are not enforced, what value do they serve?

Disclaimer: Please note, charges have not been laid at time of posting and so innocence before being proven guilty is assumed.

**A dangle chain is not intended to secure a dog at all times. A dangle chain is a length of chain left tied to a livestock guardian dog so that in the event of an emergency (we do graze in a power plant afterall) we could secure the dog, even from a distance. They also can serve as a deterrent from jumping electric fences.