Spraying fungicides from within the canopy is a more efficient method of achieving good crop coverage, as compared to trying to penetrate the crop from above.

That’s the idea behind the Beluga drop hose — technology developed in Germany by Agrotop, and now distributed by Greenleaf Technologies in North America. RealAgriculture’s Bernard Tobin caught up with Greenleaf ‘s Will Smart last month at the National Farm Machinery Show in Louisville, Kentucky, for a look at how the technology works.

In this video, Smart shows how the Beluga can be rigidly mounted to the sprayer boom and also attach to the nozzle body. At lengths of up to 72 inches, it hangs down into a corn canopy and can be equipped with two to three spray heads, each with two nozzles capable of targeting different areas of plants for fungicide, insecticide or foliar product application. (Story continues after the video.)

The system is modular, allowing growers to choose the height for spray heads. Growers can also shut off the spray heads and add a Y-Drop at the bottom for nitrogen application. “It’s basically two systems in one,” adds Smart. 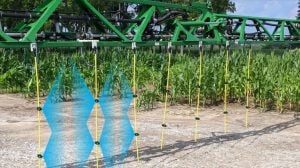 How about the bottom line? Based on Deveau’s analysis, the Beluga-directed spray system showed a $27.76/ac profit versus the unsprayed check; and a $33.37/ac profit versus overcast broadcast.

Smart notes that Beluga drop hoses will have limited availability in Canada for 2022, but wide distribution is expected in 2023.

Pulse School: Seed early to get a jump on root rots

Wheat Pete’s Word, Sept 28: Holy Peter, where did that yield come from?!

The host of Wheat Pete's Word has a jam packed episode for you today, as always! Peter "Wheat Pete" Johnson covers some quick updates from growers in the Maritimes, as they deal with the aftermath of Hurricane Fiona. As well, he's hopeful that he's going to win (win what, we're not sure), as yields are…