Highly pathogenic avian influenza has been confirmed in a wild bird in southern Ontario, bringing the number of provinces with positive cases to six.

“On March 21, 2022, the Canadian Food Inspection Agency (CFIA) reported highly pathogenic avian influenza (HPAI), subtype H5N1, in a sample taken from a red-tailed hawk that was found in the Region of Waterloo,” says a veterinary advisory distributed by Ontario’s Ministry of Agriculture, Food and Rural Affairs this week. “The hawk was reported to be showing neurological signs and was euthanized.”

With migration season underway, wild birds infected with the H5N1 bird flu pathotype have been found in all four major flyways of North America in the last four months. Cases in commercial flocks have been confirmed in the Atlantic, Mississippi, and Central flyways.

The initial finding in Newfoundland and Labrador in December marked the first time the H5 pathotype had been identified in the Americas since 2015, according to the World Organization for Animal Health (OIE.)

Since then, cases have been reported in Nova Scotia, New Brunswick, Prince Edward Island, a lone bald eagle in British Columbia, and now a red-tailed hawk in Ontario.

Most of the cases in Canada so far have involved wild birds. One commercial turkey farm in Nova Scotia tested positive in late January. There have also been several cases in backyard or non-commercial flocks in Atlantic Canada.

The confirmation of the pathogen in Ontario is significant as the province leads the country in poultry production, accounting for around a third of Canadian chicken and egg production and nearly half of national turkey production. 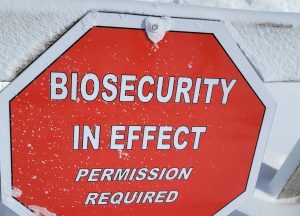 South of the border, the U.S. Department of Agriculture has confirmed highly pathogenic avian influenza in at least 17 states since the middle of January, with cases involving a total of more than 13 million commercial laying chickens, broiler chickens, and turkeys, as of March 21.

The outbreaks in the U.S. could potentially impact imports of breeding stock and/or eggs into Canada, as the CFIA is not allowing poultry imports from restricted zones in eight U.S. states. Trucks bringing animals or hatching eggs to Canada are also required to avoid driving through these restricted zones.

Producers are being reminded to follow strict biosecurity measures: