When you think insects and drought…it can be a tricky combination. After the drought across the Prairies in 2021, there are many farmers asking the question: what are grasshopper populations going to look like in 2022?

Parts of Manitoba have fortunately experienced large amounts of snowfall this winter, enough that the ditches could be underwater as the melting begins. But as John Gavloski, extension entomologist with Manitoba Agriculture, warns, the snowmelt is not necessarily enough to ensure those grasshopper eggs won’t survive.

“In the egg stage, they’re very resilient, and they can handle being underwater for a period of time. A colleague of mine once told me that he took grasshopper eggs, put them in water for a week, poured the water out, and all the eggs hatched. So they can sit underwater for a little while,” Gavloski explains. “So if your ditches are all full of water in the spring, don’t assume that the hopper eggs are all dead.”

As for vulnerable stages, hoppers are most vulnerable right after they hatch. As they get bigger and bigger, explains Gavloski, they become a bit more resilient and they actually thrive if we get some drier conditions. “The warm temperatures will speed up their development, and a dry summer gives them perfect conditions to build their populations.”

For 2022, the news isn’t looking so great. Numbers were high when the egg laying collections were taken in August of 2021, and according to Gavloski and the rest of the team that took samples in Manitoba and across the Prairies, it looks like the pests are on an upward trend.

Over the past few years, the numbers have been underestimated on the maps, compared to what happened in previous years, and as Gavloski cautions, this year could be the same. 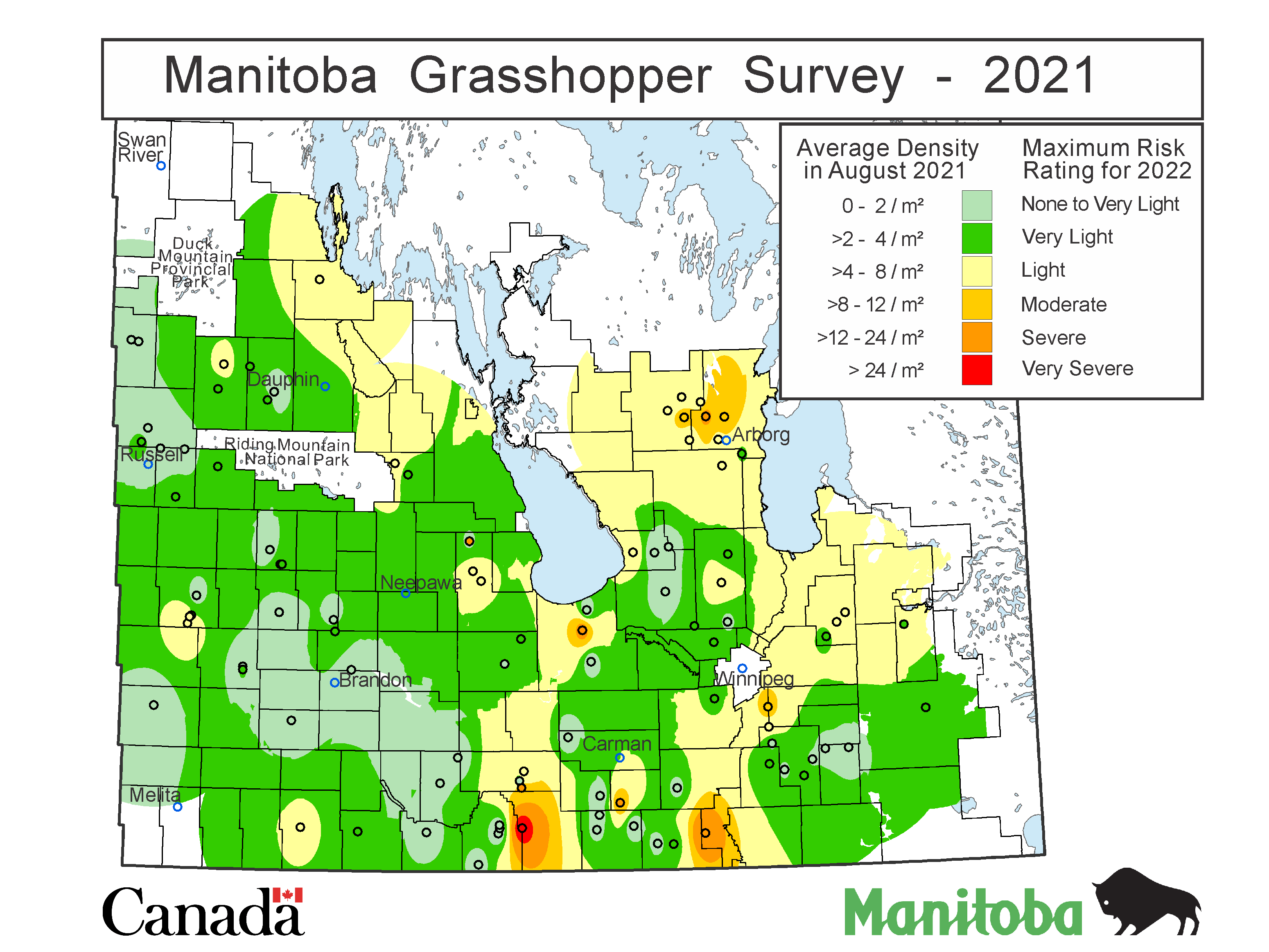 “In a nutshell, what we saw this year was that populations were once again on the increase. So over the past four or five years, we’ve been seeing some building populations. The maybe misleader part of the map is where there’s a lot of green — especially in the western parts of Manitoba, which might imply low risk. But based on what I know with what’s happening in those regions with grasshoppers, I like to factor that into the forecast as well. I would say most of the province should be expecting at least moderate — if not higher — levels going into 2022.”

Check out the full conversation between John Gavloski and Kara Oosterhuis, below: