A Toronto-based company that owns proprietary technology for producing “green” ammonia is planning to demonstrate its containerized anhydrous ammonia production system on a farm southwest of Winnipeg, Manitoba.

FuelPositive Corporation has signed a letter of intent with Curtis and Tracy Hiebert, who operate an 11 thousand acre grain farm near Sperling.

“We are excited to be working with Tracy and Curtis and their family on our first demonstration project. They take a modern approach to farming, want to be more sustainable, and are early adopters of new agricultural technologies and techniques to increase efficiency while reducing greenhouse gas emissions,” says Ian Clifford, FuelPositive CEO and chair, in a news release.

The intent of the pilot project is “to place the system on the farm and power it with electricity supplied by Manitoba’s carbon-free grid, in combination with the Hieberts’ 200-kilowatt solar array and evaluate the operational interface between the customer and the system,” the company says. “This will serve to prove the ease of use of the system and ensure the system performs as expected over time, while exposed to Manitoba’s varied and extreme climate.”

Like many farmers in Western Canada, the Hieberts have been working with anhydrous ammonia fertilizer since the late 1960s, so they are already knowledgeable and comfortable working with ammonia, notes Clifford.

The company’s modular production system is designed to fit into 20′ and 40′ containers. It has three stages: a hydrogen extractor that uses electricity to extract hydrogen from water, a nitrogen extractor that captures nitrogen from air, and an ammonia synthesis converter, which contains technology that FuelPositive holds a provisional patent for, that combines the hydrogen and nitrogen to produce ammonia. There’s also an optional stage for converting the ammonia into urea. 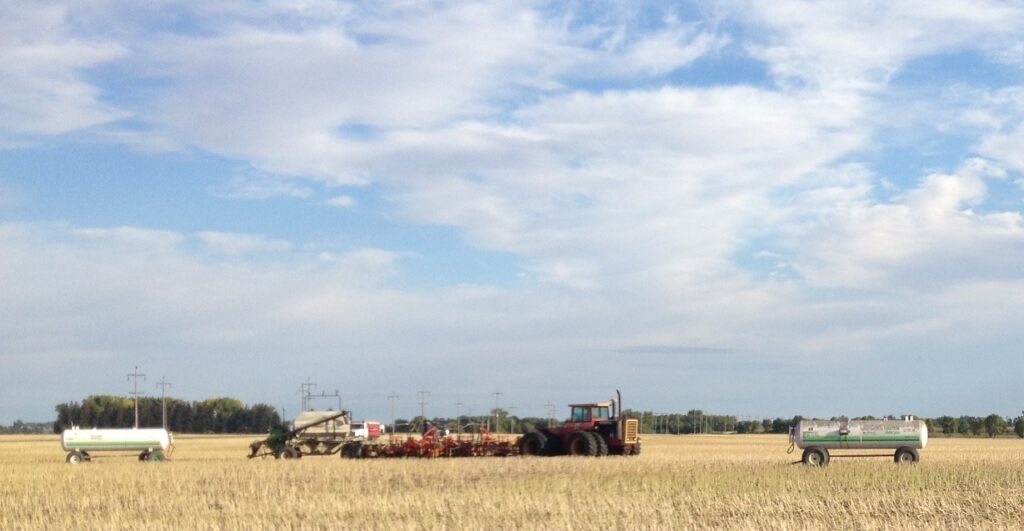 In addition to the reduced carbon footprint versus traditional anhydrous ammonia, Curtis Hiebert says he appreciates the possibility of more reliable supply and pricing if the fertilizer is made on-farm.

“We want the farm to be around for our children, so we are trying to be as good to the environment and to our soil as we can,” he says. “As well, we’ve had issues in the past few years where we were waiting for anhydrous ammonia in the field because our retailer didn’t have it in stock. We’ve also seen huge price increases. We pre-bought our ammonia for this fall at around $1,200 a tonne, and I understand that the price is double that now. The volatility is what we don’t like in the market. It’s scary. The FuelPositive system will give us stability. That’s what we like about it. It’s stabilizing the supply and stabilizing the price.”

The production of green ammonia could also be eligible for carbon credits in the future, according to the company.

The pilot project was announced as part of FuelPositive’s annual general meeting on April 19. The company said it expects to have the system at the Hiebert farm ready by late summer of 2022, pending permit approvals and logistics.

Applying the lessons of 2022 to marketing opportunities in 2023

It's been nearly two years since the first in a series of five separate announcements were made regarding plans to build or expand canola crush facilities in Saskatchewan, largely in response to low-carbon fuel policies driving demand for canola oil. Announcements are one thing, but actual construction is another. While Ceres Global Ag has since…