Grasshoppers are usually associated with dry conditions and go hand-in-hand with drought. And yet, grasshoppers are once again showing up in high numbers and causing crop damage in areas of the Eastern Prairies where there’s been flooding, and more than enough rain and soil moisture for the first half of the growing season.

“We’ve had three or four dry years in a row, which really got the population built up. A lot of people were optimistic with all the rain we’ve had this year, we wouldn’t have as many grasshoppers, but that’s not necessarily what we’re seeing,” says John Gavloski, entomologist with Manitoba Agriculture, in this Soybean School episode recorded in the “The Bug Stop” tent at Manitoba Crop Diagnostic School at Carman. 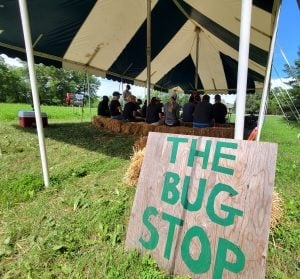 When it comes to rain and grasshopper numbers, a lot depends on the timing, he explains.

“Excess moisture in April and May won’t do a lot except for maybe delaying the development, but as far as killing grasshoppers, grasshopper eggs can sit underwater for days and not get killed,” says Gavloski.

Heavy rains in June will have a much greater impact, as newly-hatched hoppers don’t have any fat reserves and must feed immediately. They’re also more vulnerable to disease at this point, he explains.

High humidity is also conducive to the spread of a fungal pathogen that kills grasshoppers.

Gavloski discusses the impact of wet conditions on grasshopper populations, as well as tips for scouting, common types of grasshoppers, and strategies for spraying, in this Soybean School video:

Wheat School: Did my Wheat Make it? Early Input Decisions for the Ontario Wheat Crop

Affects of Modern Farming on the Soil