Improved growing conditions for much of Western Canada has Statistics Canada predicting a much larger crop for 2022 harvest than was previously reported.

StatsCan says the Crop Condition Assessment Program shows that overall plant health in the Prairie provinces was similar to higher-than-normal at the end of July, indicating the possibility of normal to much higher-than-normal yields.

Barley acres are down, says StatsCan, but yields are expected to be 57.7 per cent higher, bumping production by 34.3 per cent, year-over-year to 9.3 million tonnes in 2022. Oat production is projected to rise by 59.2 per cent to 4.5 million tonnes.

They note good conditions for AB & MB, but drier conditions for Sask (I read as potential for ??yields from 1st est, which, FWIW, are usually on high side) #OATT #CDNAG pic.twitter.com/2suzx4MJdp 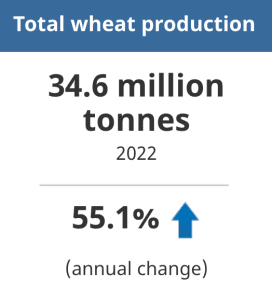