Two poultry farms in Alberta have tested positive for highly-pathogenic avian influenza (AI) over the past week, possibly signalling the start of an anticipated resurgence of the virus this fall.

The Canadian Food Inspection Agency reported a case on a commercial farm in Sturgeon County, Alberta on Wednesday, which followed a confirmed case in a commercial flock in Athabasca County last week.

While the number of new AI cases dropped significantly in June and July, poultry producers and industry stakeholders have been bracing for a rebound of the virus with the onset of the fall migration season.

As of August 31, more than two million birds in Canadian poultry flocks have been directly affected by AI this year, with nearly a million of those birds located in Alberta (see chart below). 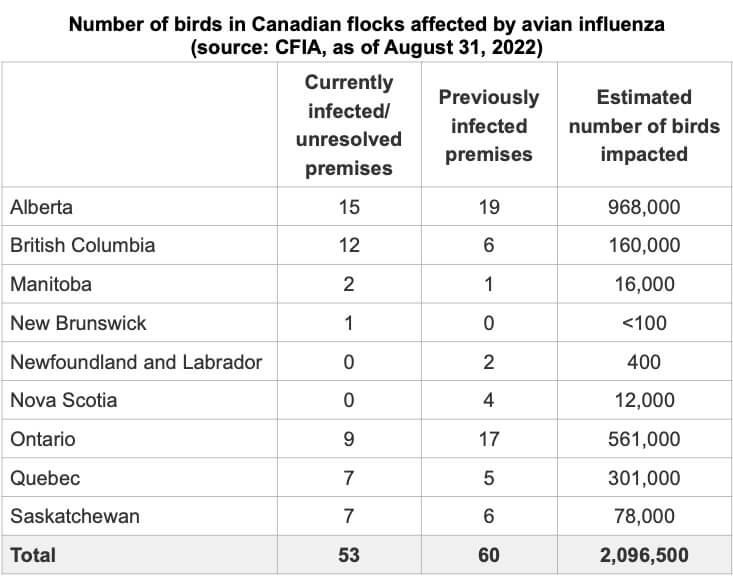 Most provinces, including Ontario, Saskatchewan, Manitoba, and B.C., have not reported any new AI cases since May or June. Quebec had several cases in July, with the most recent case in the province confirmed on August 1.

“While we hoped there would not be a resurgence of HPAI this fall, we knew this was a possibility,” noted Gerald Stokka, veterinarian and livestock stewardship specialist at North Dakota State University. “We encourage poultry owners of all sizes to continue biosecurity measures to protect your birds.”

More than 40 million birds in commercial and backyard flocks in 39 U.S. states have been affected by AI in 2022, according to the USDA, as of August 30.

U of M dairy research receives $1.4 million in gov’t funding

This past summer, Burger King released a rather distasteful advertisement, claiming that a lemongrass feed additive would reduce the amount of methane from cow farts. The ad was changed back in July, with a resulting apology to ranchers, and a review of their feed additive study. In the latest instalment of their advertising campaign, farmer,…