“Producers are still making strategic investments in their operations and buying farmland, which is in short supply and high demand. This healthy farmland market is a good indication there is confidence and optimism in the future of the industry among producers,” he says. 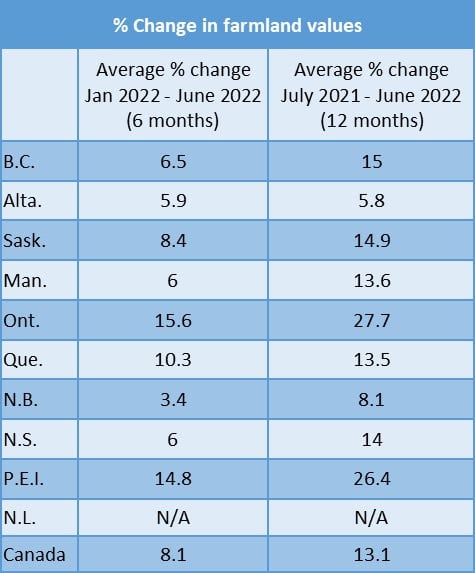 Provinces with a higher percentage of arable land, such as Saskatchewan and Alberta, seem to experience a slower pace of increase in land values, suggesting that competition for land with limited supply, such as in Ontario, drives prices.

There were insufficient transactions in the Yukon, Nunavut, Newfoundland and Labrador to fully assess farmland values.

It should be noted that most land transactions were likely agreed to prior to the most significant interest rate increases.

Gervais says that increasing interest rates will slow demand over time, however increasing farm income is offsetting some of the impact.

Farm cash receipts climbed 14.6 per cent year-over-year for the first half of 2022, although grain, oilseed, and pulse receipts were slightly lower in the first six months, as expected due to the drought across many parts of the Prairie provinces in 2021. FCC says receipts are projected to increase 18 per cent for the full 2022, relative to 2021.

Big corn yields demand intense management. From tillage strategies, to nitrogen management, variety selection, pest management and more, RealAgriculture’s Corn School is a video series that tackles every facet of the corn growing season in an engaging and informative format. Our Sponsors The Corn School is made possible by support from BASF and PRIDE Seeds.