The final tally hasn’t been published yet, but 2022 will go down as the new record high year for soybean yields in Western Canada, mainly southern Manitoba.

Statistics Canada’s latest provincial estimate came in at 43 bushels/acre, up from 27 bu/ac in 2021 (see graph below), but Dennis Lange, Manitoba Agriculture’s pulse specialist, says he expects the final number will be higher after producers’ crop insurance reports are compiled.

“Our biggest year [previously] was 2016 when we had an over-abundance of moisture, but we set a provincial record at 42 bushels an acre. And this year, we had good moisture and in most growing regions we didn’t have those really bad extremes that we had in 2016. So my projection right now is going to be somewhere around 45 bushels an acre, just from the numbers I’ve been hearing,” says Lange.

So what led to the record yields? And is there anything growers can do to replicate the results? Those are some of the questions Lange discusses in this new Soybean School episode.

As always with soybeans, good soil moisture during the critical pod-filling stage later in the growing season was a large factor. Moderate temperatures during flowering may have also limited flower abortion, says Lange.

It wasn’t necessarily by choice, due to snow and flooding in spring, but delayed planting may have also resulted in more acres going into warmer soils, he notes.

“One of the first things I saw this year is how quickly the soybeans came out of the ground. We were seeing a lot of planting in mid-to-late May,” he says. “And then as the summer progressed, we didn’t have those extreme temperature days that we have some years. We had a lot of timely rains in a lot of areas, and some really good plant stands overall, not a lot of disease pressure, and at the end of the day, we saw some really good numbers coming from from most areas of Manitoba this year.”

Keeping fields weed-free as long as possible is another manageable yield factor — one that is becoming more challenging with new cases of herbicide-resistant weeds, especially waterhemp, showing up in southern Manitoba, says Lange.

Check out the video below for more on what led to record yields in Manitoba in 2022, and what can be learned for managing soybeans in future growing seasons: 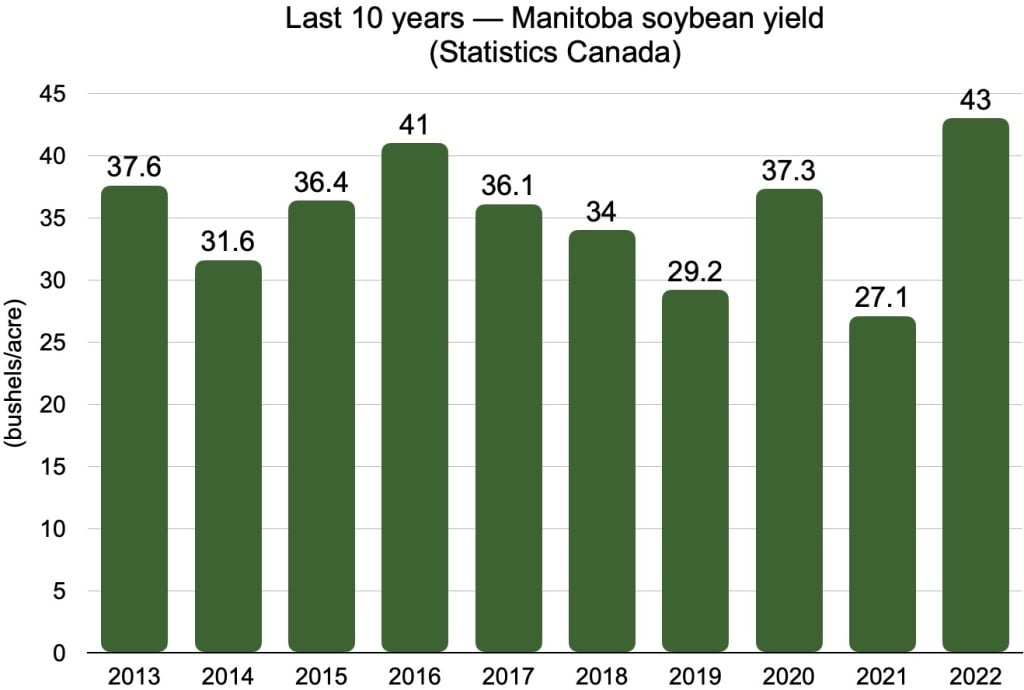 Crops that lodge due to high moisture or severe wind conditions may suffer lower yields due to poor grain fill or even lost grain. Lodged crops may also be more susceptible to disease infection, which impacts quality. Late last year, Syngenta received the all-clear for a new plant growth regulator (PGR) called Moddus, that helps strengthen…