Nitrogen prices for North American farmers are no longer at their 2022 highs, but they still have a long way to drop before returning to where they were a few years ago.

Where that floor is for the market will largely be determined by European energy policy, John Daniels, fertilizer product manager for Paterson GlobalFoods, told farmers at St. Jean Farm Days in southern Manitoba last week.

A warmer than normal winter in Europe, combined with the end of the energy stockpiling by European countries that occurred in fall, have resulted in lower natural gas prices, and lower ammonia production costs for nitrogen fertilizer manufacturers. The market has also had time to adapt to the sanctions, reduced capacities at certain ports, and some of the other geopolitical fallout from Russia’s war in Ukraine.

“We’re in a period of returning to normal, figuring out different trade flows,” says Daniels, in the interview below, following his Jan. 12 fertilizer market presentation at St. Jean Farm Days. 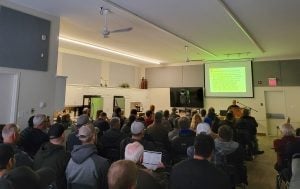 “Product from Russia that used to go to Europe is now finding other homes. They are finding ways to ship product that doesn’t go through the Black Sea. We are finding ways to get natural gas and energy flowing across the world, and so we’re going back to normal,” he says. “Price is usually a function of inventory, so we’re slowly rebuilding. We’re not quite there, and it’s not going to happen overnight. It may take a year or two as we get back towards normal, but we are starting to progress in that direction.”

As Europe looks to cut its reliance on Russian energy, adjusting the continent’s energy system won’t happen overnight, notes Daniels. “Energy security in Europe is going to continue to be a factor. It maybe won’t be as acute as it was this past year, but it’s going to probably set a floor of what we consider normal.”

China has also started loosening restrictions on nitrogen exports as their cost of production has dropped, and Daniels says the market anticipates more exports out of China in the coming year.

Closer to home, he says Western Canada is on pace for positioning fertilizer supplies for spring and that “there’s not really much prospect of a shortage.”

Rising interest rates are also affecting fertilizer pricing for farmers in two ways, notes Daniels. First, he says it’s costing suppliers more to finance fertilizer between when they purchase it and when they sell it. Second, he says the higher carrying cost can make retailers less willing to hold inventory for longer periods, which can result in more price volatility if just-in-time supplies run tight.

Check out the interview below for more with Paterson’s John Daniels on factors driving the nitrogen fertilizer market heading into the 2023 planting season:

Related: Fertilizer markets settle in to a lull — where to now?